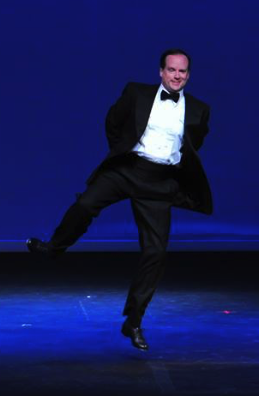 I tuned in on YouTube this weekend to catch the waning days of NC Spin’s run on WRAL.  “Mr’Conservative” — John Hood was there, as usual, along with an old guy from The John Locke Foundation to carry our standard against “Blinkin’ Chris” and “Grandpa Tom.”

I held my breath in anticipation of the wisdom soon to be dripping from Professor Hood’s mouth, and then it came:

“When you have a president who is in the 30s in the polls,  your party’s in  trouble.  Also, don’t nominate creeps.”

Wow.  A double-whammy against Donald Trump AND Roy Moore — two guys who clearly don’t have Monsieur.Hood’s refinement, taste and passion for tap-dancing and tinkling of the ivories.

First, the monster rallies Trump has had in Alabama — as late as last month — would not indicate 70 percent of the Alabama electorate hating the president.  Drive by polls keep trying to convince us that Trump is as hated here.  But I don’t see it. (And I get around.)

Second, “creeps”?  I saw not one piece of evidence that ANY of the sex-related allegations against Moore were remotely true.  The guy is a decorated Vietnam vet who has put his life, his reputation, and his career on the line standing up for his beliefs.  Hood, on the other hand, who has never had a real job — is currently pulling down  six figures writing a few columns, appearing on a little-watched basic cable show, and riding around in a car-seat in the back of Uncle Art’s Bentley.  As far as Moore goes — there, but for the grace of God go you, John.  Or anyone else the left decides to smear.

Hood’s rump is still probably sore over his and Uncle Art’s friend Marco’s loss in the 2016 primaries.  But Trump is HERE.  As a result, the conservative agenda has seen more progress in DC since Ronnie and Nancy flew out of town.  I don’t think Hood’s hatred of Trump has any real ideological basis at all.  I believe the president triggers PTSD in lil’ John — evoking bad memories of those guys in high school who,laughed at his tap shoes.