Two gospel truths about liberals:  (1)  They can make ANYTHING political, and (2)  they have absolutely no shame in regard to doing it.

Once again, let’s look to the nimrods at Progress NC Action,  a leftist wacko non-profit run by  a former ABC11 reporter: 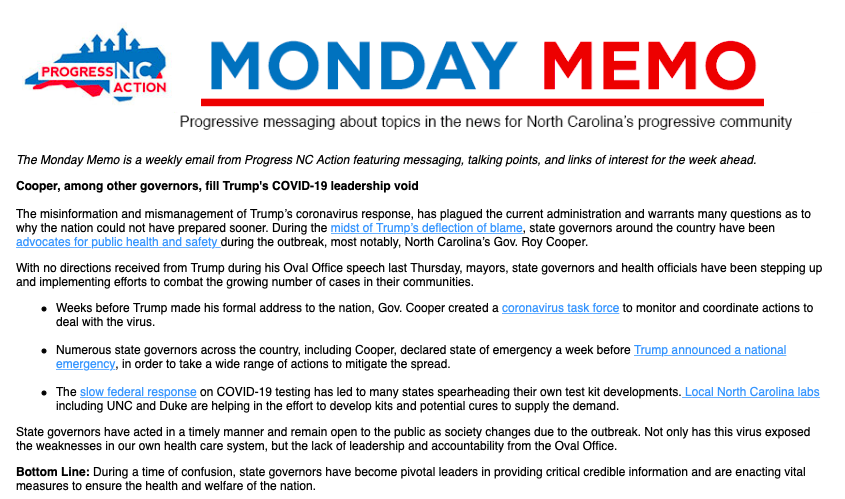 They couldn’t get him on Russian “collusion.”  They couldn’t get impeachment done.  So now it’s time to paint Trump as uncaring — sitting on his hands and waiting for as many people as possible to die.  Let’s try to drop  at least a little bit of truth into the discussion:

Now that the media can no longer attack Trump over the coronavirus testing (as you’ll see below), we’ve moved to ventilators. “Ventilators” is the new Katrina, the new metric with which to beat Trump senseless… So naturally, the media are going to lie shamelessly, which is exactly what they are doing, even as I write these words:

In his message, the president recommended that states procure respirators and ventilators because it would be faster — but added that the federal government “will be backing you.”

The Times journalists omitted the bulk of the president’s statement as they shared the story on social media. The misleading, partial quote was also boosted by a CNN correspondent and became the lead headline at the left-wing Huffington Post.

Despite growing online backlash to this misinformation, the journalists have yet to delete or retract their comments.

He’s telling the governors, Do what you can while we do what we can do. This is excellent advice the liars at the far-left New York Times are deliberately twisting to cause panic, to tell the public the president doesn’t care.

Now you know what Hillary and Obama’s people meant when they boasted about never letting a good crisis go to waste.

One thought on “STILL playing politics with The New Flu”