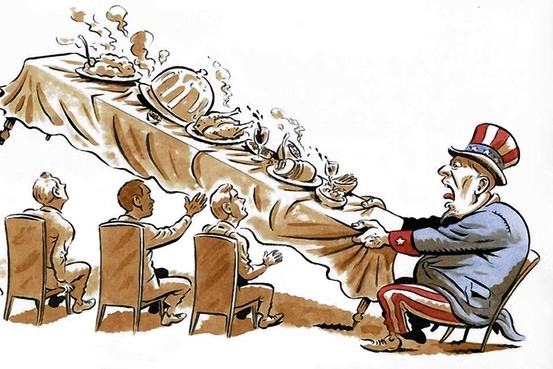 Former Senator — and Economic PhD — Phil Gramm has an excellent piece in today’s Wall Street Journal addressing some interesting facts behind what the the professional left, the media and the DC establishment refer to as “income inequality’:

In the stagnant days of the Carter administration, when inflation was approaching 13.5% and interest rates were peaking at 21.5%, income was more evenly distributed than in any period in 20th-century America. Since the days of that equality in misery, the measured income of the top 1% of income tax filers has risen over three and a half times as fast as the income of the population as a whole.

This growth in income inequality is largely the result of three dynamics:

1) Changes in the way Americans pay taxes and manage their investments, which were a direct result of reductions in marginal tax rates.

2) A dynamic shift in the labor-capital ratio, resulting from the adoption of market-based economies around the world.

3) The flourishing of economic freedom and technological advances in the Reagan era, which were the product of lower tax rates, a reduced regulatory burden, and an improved business climate. These changes have not only raised the measured income of the top 1%, they benefited the nation and the world.

While income distribution has become a source of protest and political debate, any analysis of taxes paid in high tax-and-spend countries shows that the U.S. has the most progressive income tax system in the world. An inconvenient truth for the advocates of higher taxes on America’s rich is that big governments in developed countries are funded not by taxing the rich more than the U.S. does, but by taxing everybody else more.

In 1986, before the top marginal tax rate was reduced to 28% from 50%, half of all businesses in America were organized as C-Corps and taxed as corporations. By 2007, only 21% of businesses in America were taxed as corporations and 79% were organized as pass-through entities, with four million S-Corps and three million partnerships filing taxes as individuals. By reducing personal tax rates below the level of the corporate rate, the Tax Reform Act of 1986 dramatically influenced how entrepreneurs structure businesses.

This has had a profound effect on what is now measured as the income of the top 1%, since a significant amount of what is now declared as personal income is actually income from businesses that are now taxed as individuals.

In 1986, just 5.6% of the income of top 1% filers came from business organizations filing as Sub-chapter S-Corps and partnerships. By 2007, almost 19% of income declared on tax returns filed by the top 1% came from business income. A significant amount of income that critics claim is going to John Q. Astor actually is being earned by Joe E. Brown & Sons hardware store.

By reducing the penalty for transferring capital from one investment to another, these lower tax rates increased the mobility of capital. High-income taxpayers sold more assets, declared more income, and paid more taxes.

Similarly, when the tax rate on dividends fell to 15% in 2003, dividend income for the top 1% grew 178% by 2007 to make up 5.6% of the income of these filers. In 2007, immediately prior to the recession, capital gains and dividend income combined was equal to the amount of salary, bonus and exercised stock options earned by the average top 1% filer.

Lower tax rates made dividend-paying stocks more attractive to high-income investors and made dividend payouts more attractive for companies that would have previously retained those earnings or bought back their stock. Capital trapped in companies with below-market rates of return was redeployed and the entire economy benefited.

All of this has had a huge impact on the measured income of the top 1% and the growth in income inequality. This impact can be estimated by examining what would have happened to the income of the top 1% if tax rates had not been lowered and these economic transformations had not occurred.

If the share of income coming from businesses, capital gains and dividends had remained at the levels before the tax rate changes of 1986, 1997 and 2003 respectively, the income of top 1% filers would have been 31% lower in 2007. The growth in income since 1979 for top 1% filers would have been only 2.5 times as large as the income growth of all taxpayers—not 3.6 times as large.

The growing participation of China, India, Brazil, Russia and Turkey in the world economy has also affected income inequality. The vast expansion of labor engaged in world commerce has raised the return on capital and reduced the relative return on labor. The share of income flowing to capital—both traditional and human capital such as education and training—has risen.

In relative terms, the return to unskilled labor has fallen. Short of a crippling reversal in world trade, which would reduce the value of both labor and capital, this effect will dominate world markets for the foreseeable future. Since high-income Americans own more capital and have higher levels of education and training, their incomes have grown faster than everyone else’s.

The flowering of talent from the expanded freedom and technological progress ushered in by the Reagan era has also played a role. Inequality is a natural result of the expansion of liberty and the development of new technology and new products. Henry Ford, Andrew Carnegie, Sam Walton and Bill Gates caused the income distribution to become more uneven, but they enriched the world.

To vilify success and the rewards it garners is an assault not just on capitalism but on liberty itself. As Will and Ariel Durant observed in “The Lessons of History” (1968), “freedom and equality are sworn and everlasting enemies, and when one prevails the other dies . . . to check the growth of inequality, liberty must be sacrificed.”

Nowhere is the political debate over income inequality more detached from reality than the call for the top 1% of American income earners to pay their “fair share.” The Organization for Economic Cooperation and Development (OECD) data on the ratio of the share of income taxes paid by the richest taxpayers relative to their share of income show that the U.S. has the world’s most progressive tax burden.

The top 10% of earners in the U.S. pay 35% more of the income tax burden than in Sweden and 22% more than in France. These figures—from the 2008 OECD publication “Growing Unequal?”—include all household taxes imposed on income at the federal, state and local level, including social insurance taxes.

In an eternal irony unique to large welfare states, it is the expansion of government in the name of the poor and middle class that always costs poor and middle-class families the most. When the U.S. collects 16.1% of GDP in income taxes, the top 10% of taxpayers pay 7.3% and the other 90% pick up 8.9%.

If the U.S. spent and taxed like France and Sweden, it would hardly affect the top 10%, who would pay about what they pay now, but the bottom 90% would see their taxes double.

Since OECD members have significantly higher consumption taxes on average than the U.S., the total tax burden of bigger government is even more heavily borne by lower-income citizens in developed nations than these numbers suggest.

The real and alarming message in these OECD numbers is that there appear to be limits in the real world to how much tax blood can be extracted from rich turnips. With much higher marginal income-tax rates, countries that are clearly willing to soak the rich have proven to be incapable of doing so.

Proposals to raise taxes on high-income Americans in the name of “fairness” not only threaten economic growth. The experience of nations with large governments shows that this argument is simply a red herring for a massive tax increase on middle-income Americans.