In June, a low-life nutcase loser took a loaded weapon into a church in Charleston, South Carolina and shot the place up.  Instead of taking

it at face-value as the horrible crime and tragedy it was, the left politicized the hell out of it.

The shooter got photographed with the Confederate flag, so — *naturally* — it had to be taken down and banned. We all got lectured about how white people need to atone for 400 years of oppression.  Leftists beat us all over the head and shoulders with this miserable wretch of a criminal loser.  *Dylann Roof was not just a murderous criminal, he was the embodiment of the sins of white, heterosexual America.*

Fast forward to this week.  A horrible piece of workplace violence unfolded for the nation during a live local newscast.  A black suspect killed some white victims and then — reportedly — killed himself.  Did we, in response, get a lot of hand-wringing and self-examination about interracial violence?   Nope.  Instead, the left and the drive-bys want to talk about the killer’s race and homosexuality and how BIGOTS forced him into this. Of course, the gun control crowd had to get their two cents in, too.

Ben Shapiro, writing over at Breitbart, really hit the nail on the head with this Virginia case and the media’s reaction:

[…] Had a white straight man killed a black gay man, released first-person tape of the shooting, and then unleashed a manifesto about being victimized by affirmative action and anti-religious bigotry from homosexuals, the media would never stop covering the story. They’d be eager to report that shooter’s motives with all the attendant politically correct hullaballoo about the racism and homophobia of the United States more broadly. We would hear about white supremacy (reprehensible Black Lives Matter leader Deray McKesson actually jumped the gun, thinking the shooter was white, and tweeted, “Whiteness will explain away nearly anything”). 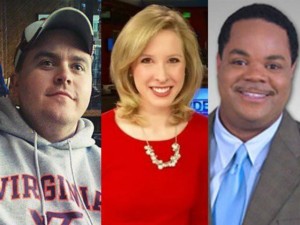 We would hear excoriations of the Republican presidential candidates for their failures to stand with the Black Lives Matter movement–and their opposition to same-sex marriage. In similar circumstances, the entire political and media establishment determined that the Confederate flag was somehow to blame for Dylan Storm Roof’s brutal slaying of nine people at a historically black church; just last week, the media tried to blame Donald Trump’s anti-immigration stance for two thugs beating up a Hispanic homeless man in Boston.[…]

Oh — the rainbow flag of the gay rights movement was found in the killer’s apartment.  Will it get the same treatment the Confederate flag got in the wake of Charleston?  MORE:

[…] But Bryce Williams’ self-described victim status, even while murdering innocents, will merit no rethinking of the divisive politics in which he apparently bathed. We won’t have a conversation about whether pushing a perennial picture of victimhood for blacks and gays in the most black-friendly, gay-friendly country on the planet could drive supposed victims to violence. We won’t talk about whether the Democratic Party’s takeover by the Black Lives Matter crew has encouraged some people to believe that only black lives matter, since only black lives are in danger – and even then, only some black lives matter, namely those killed by white people. Instead, we will be assured that Bryce Williams is an outlier by the same people who blamed Sarah Palin for Jared Lee Loughner shooting Gabrielle Giffords.

It is true that statistical outliers should not be used to club entire movements into submission. But leftists protesting at the linkage between Williams and their favored political causes have no ground on which to stand – they consistently blame conservatives for outlier events with no statistical basis. Moreover, Williams’ violence is part of a larger trend, not of black men killing white people (that still happens disproportionately, but the numbers are down), but of black men using supposed American racism as a rationale for violence more generally, and of gay people using supposed American homophobia as a rationale for violation of others’ rights.

But most of the the media will swivel to gun control, following the lead of the White House and Hillary Clinton, both of whom called for heavier gun control laws – even as both push for the release of criminals from prisons, a crackdown on law enforcement, and a racially divisive narrative of the country pitting black against white, all for political gain.

All of these policies will do nothing to stop Bryce Williamses — in fact, they will make Bryce Williamses more common. Teaching Americans that they aren’t victims would be a great way of battling evil – most victims aren’t evil, but virtually all evil people think they are victims, and thus justify their violence. But teaching Americans that they aren’t victims would undercut the Democratic message that all minorities are victims, and thus require bigger government. And that message, and its attendant political success, must take precedence over the building of a more inclusive, more understanding country.

3 thoughts on “Shootings and the media: Charleston church vs. On-Air in Virginia”