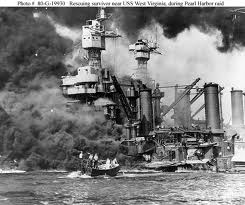 I hope everyone had the opportunity to stop and reflect on that terrible tragedy that struck our forces in Hawaii 70 years ago.   A foreign enemy launched a horrific, unprovoked surprise attack on our nation.  For the most part, the American people — from both parties and the full demographic spectrum — united to seek vengeance for the tragedy at Pearl Harbor.

FDR was a pretty liberal guy.  But you didn’t hear him calling for trials of Japanese soldiers or setting crazy rules of engagement dictating when our guys could fire on the kamikaze pilots.  FDR and the politicians stepped out of the way, got our soldiers the material they needed to win, and let our military leaders call the shots that were needed to win. As a result, we earned decisive victories on two fronts.

9/11 was my generation’s Pearl Harbor.  The leftists in the alleged mainstream media are doing their best to make us forget about 9/11, and beat down the morale of our troops in the battlefield.  Why can’t we come together — like our country did in the wake of the tragedy at Pearl — and do what’s needed to achieve justice for all of those innocents murdered on 9/11/01?

The next time you cross paths with a veteran or an active duty service member, shake their hand and tell them  that — despite the actions of our moronic media and politicians — you appreciate them for what they’ve done.