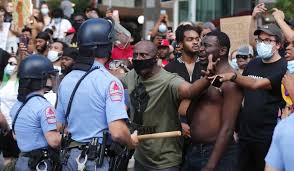 Andrew Brown’s shooting by sheriff’s deputies have put this small eastern North Carolina county in the spotlight.  Democrats and their friends in the media and radical left have been working overtime to whip up animosity against police officers.

The Pasquotank district attorney has ruled the deputies did nothing criminal in the warrant service that went really, really awry.  The leftist mob is not satisfied with that.  They’ve dragged the Biden Justice Department into the matter.  BLM is going to make sure white police heads roll — one way or another.

The latest news out of Elizabeth City — the county seat — focuses on one of the accused but cleared deputies resigning from the department.  The insinuation in the media — of course — is that something is rotten in Denmark.  Details all the drive-bys are burying in their stories probably offer a better explanation:

[… Sheriff] Wooten’s office also has expressed concerns about the deputies’ safety. At least one deputy and another county official reported unknown vehicles or people outside their homes, the sheriff’s office said.

Some websites have posted details about the deputies that makes their home addresses known. Early on, the sheriff had advised the deputies “to take precautions or consider staying somewhere else for their safety.” …

If I didn’t know better,  I’d say the peace-n-love crowd was trying to incite violence against the accused deputies and their families.  And Roy Cooper, Joe Biden, Josh Stein and Kamala Harris are all supporting these thugs.

Believe it or not, some of the people arrested by these deputies are likely to send friends or family out for vengeance against said deputies or their families.  That is why so many attempt to keep their address secret.

The deputy who is the focus of this story likely resigned because he’s tired of the nonsense — politicians and other leaders throwing you under the bus when some connected rabble-rouser and his /her followers holler, the media dragging your name through the mud without knowing half of the story.