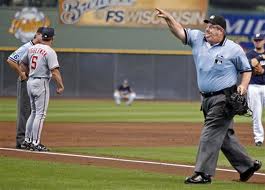 It’s tough being a North Carolina Democrat these days.  You’ve lost the majority in the General Assembly.  You are seriously looking at a beat-down in the November governor’s race. Your nominee for governor MIGHT be THIS GUY.  You’re about to lose your majority in the congressional delegation.  BarryO is at the top of your ticket this year. (His nominating convention is in Charlotte.)   And while fighting a constitutional amendment that bars gay marriage, you have an alleged gay sex harassment scandal at party HQ in Raleigh.

North Carolina Democrat Party executive director Jay Parmley, one of the central figures in the sex scandal, has handed in his resignation letter.  Of course, he’s not going quietly:

The executive director of the N.C. Democratic Party resigned Sunday as calls for his ouster mounted amid questions regarding a secret agreement to pay a former staffer to keep quiet about sexual harassment allegations.

Jay Parmley, who served a year at the helm of the party, denied harassing any employee and blamed right-wing blogs for “spreading a false and misleading story” about the incident.

Really? According to your own emails, if we had left the story to the alleged mainstream media (like the AP and The N&O) the story would have NEVER come out.  While you’re at it, Jay, let us know EXACTLY what we’ve said that has been “false and misleading”.  (Shall I hold my breath while I wait?)  Read on:

“Even though I have not done anything wrong, it is clear to me that I need to move on,” Parmley wrote in his resignation letter.

Party Chairman David Parker accepted his resignation but avoided any comment on the case and suggested Parmley didn’t deserve to be fired for cause. He blamed politics.

Politics?  Your own people made the allegations.  This NEVER would have seen the light of day, had it been up to the AP and The N&O. Read on:

“After consulting legal counsel, and based on my own experience in harassment cases and my own personal philosophy, it became my opinion that there have not been grounds for termination for cause of Jay Parmley,” said Parker, an attorney. “In this political world of rushing to judgment and the presumption of guilt, however, my legal and personal opinion has been outweighed by this having become a political distraction and issue.”

Democratic activists responded quickly to the news and suggested Parker also should resign.

Watt Jones, a member of the state party’s executive committee who raised concerns about the settlement agreement, said Parmley made the right decision for the party.

“Clearly I think there are others who should resign, too,” Jones said.

Democratic consultant Perry Woods of Raleigh echoed the sentiment. “I think Jay did the right thing,” he said. “David Parker should join him.”

Earlier this weekend, party activists called for Parmley and Parker to resign amid questions about a financial settlement given to a low-level staffer earlier this year who was fired soon after he complained about being sexually harassed by a senior party official. The settlement agreement and nondisclosure statement came to light Friday in internal party emails obtained by The News & Observer, but the documents did not identify the party official responsible.

Hold on.  Hold on.  Let’s give credit where credit is due.  The Daily Caller and Civitas broke this story.  You guys played catch up.  Continue:

At the Wake and Durham county party conventions Saturday, party activists introduced resolutions demanding Parker and Parmley resign or be fired. Other party officials also are privately asking the two top officials to leave for the sake of the party.

In Wake County, Woods put forth a resolution saying the party “must deal with sexual harassment claims in an open and transparent fashion.”

The party must be “not only beyond guilt but above suspicion, and event a hint or perception of a cover-up is damaging to the party’s credibility,” the resolution stated.

In introducing the resolution, Woods noted North Carolina’s prominence in the national political picture as a battleground state in the presidential race and host of the Democratic convention, suggesting the state party scandal could taint the 2012 election.

The resolution also said Parker’s statement Friday – which said the party won’t comment the matter – only raised more questions about how it was handled behind closed doors, even out of the purview of other top party officials.

Muriel Offerman, the treasurer of the state Democratic Party and a Parker ally, spoke against the resolution. “This is a personnel mater with in the party,” she said in an interview Sunday. “Personnel matters are not to be discussed in public. Period.”

A couple other Democrats echoed Offerman’s remarks, saying the party should handle the matter, and Woods pulled the resolution before a vote took place. Woods declined to comment about the matter.

At the Durham County party convention, Danielle Adams, a member of the local soil and water conservation district board, put forth a handwritten resolution also calling for the party’s top two officials to be removed. It came soon after Parker addressed the convention. He didn’t mention the scandal in his remarks and again no vote took place and it was referred to the state party’s executive committee for consideration.

The turmoil in the party ranks came the same day Lt. Gov. Walter Dalton suggested party officials should resign or be fired if the allegations are true. “We cannot tolerate sexual harassment in the workplace,” Dalton said Saturday at the Mecklenburg County Democratic Party convention. “If there’s any truth to the allegations, somebody should resign or be fired immediately. We won’t tolerate that.”

The party is not talking about the matter. But former party administrator, Sallie Leslie, said Friday she recently quit in part because of how the party handled the matter, citing “unethical actions by party leadership.”

Leslie’s longtime service to the party and solid reputation is helping drive activists’ concerns. The Wake County Democratic Party approved a resolution supporting Leslie at its convention and her comments were cited in Woods’ resolution demanding party leaders’ removal.