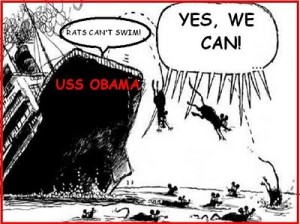 The Politico — hardly a right-wing rag — has broken a story about a bipartisan group of politicians seeking to exempt themselves and their staffs from the impending implementation of ObamaCare:

Congressional leaders in both parties are engaged in high-level, confidential talks about exempting lawmakers and Capitol Hill aides from the insurance exchanges they are mandated to join as part of President Barack Obama’s health care overhaul, sources in both parties said.

The talks — which involve Senate Majority Leader Harry Reid (D-Nev.), House Speaker John Boehner (R-Ohio), the Obama administration and other top lawmakers — are extraordinarily sensitive, with both sides acutely aware of the potential for political fallout from giving carve-outs from the hugely controversial law to 535 lawmakers and thousands of their aides. Discussions have stretched out for months, sources said.

A source close to the talks says: “Everyone has to hold hands on this and jump, or nothing is going to get done.”

Yet if Capitol Hill leaders move forward with the plan, they risk being dubbed hypocrites by their political rivals and the American public. By removing themselves from a key Obamacare component, lawmakers and aides would be held to a different standard than the people who put them in office.

Democrats, in particular, would take a public hammering as the traditional boosters of Obamacare. Republicans would undoubtedly attempt to shred them over any attempt to escape coverage by it, unless Boehner and Senate Minority Leader Mitch McConnell (R-Ky.) give Democrats cover by backing it.

The problem stems from whether members and aides set to enter the exchanges would have their health insurance premiums subsidized by their employer — in this case, the federal government. If not, aides and lawmakers in both parties fear that staffers — especially low-paid junior aides — could be hit with thousands of dollars in new health care costs, prompting them to seek jobs elsewhere. Older, more senior staffers could also retire or jump to the private sector rather than face a big financial penalty.

Several proposals have been submitted to the Office of Personnel Management, which will administer the benefits. One proposal exempts lawmakers and aides; the other exempts aides alone.

When asked about the high-level bipartisan talks, Michael Steel, a Boehner spokesman, said: “The speaker’s objective is to spare the entire country from the ravages of the president’s health care law. He is approached daily by American citizens, including members of Congress and staff, who want to be freed from its mandates. If the speaker has the opportunity to save anyone from Obamacare, he will.”

Reid’s office declined to comment about the bipartisan talks.

Bob Moffit, the healthcare guru at The HeritageFoundation has weighed in on all this as well:

No argument for Obamacare’s repeal can top the simple fact that Members of Congress do not want it to apply to them.

Today’s Politico reports that the House and Senate congressional leadership—both Democrats and Republicans working in cahoots with Obama Administration officials—have been secretly negotiating for months trying to find a way to exempt Members of Congress and their staffs from being forced into Obamacare’s health insurance exchanges.

Beginning on January 1, 2014, these exchanges, to be run by the federal government or the states (under federal rules) will offer federally “qualified” insurance coverage for millions of Americans. Ordinary Americans must either sign up or face a tax penalty. Senator Max Baucus (D–MT), chairman of the Senate Finance Committee, has now famously described the Obama’s Administration’s implementation of this process as an oncoming “train wreck,” and Henry Chao, an Administration official involved with the implementation of the law, just hopes that Americans can avoid a “third-world experience.”

According to the Politico story, there are two major reasons why Members of Congress want to exempt themselves and their staffs from the terms and conditions of the law:

For veteran Capitol Hill watchers, shenanigans behind closed doors to enable Congress and its staffers to escape Obamacare come as no surprise. After all, the national health care law was fashioned through repulsive backroom dealing (the “Cornhusker Kickback,” the “Louisiana Purchase,” etc.) that set a record for arrogance and contempt of popular opinion. Favored businesses and unions got special exemptions (more than 1,200 waivers) from Obamacare’s insurance rules. So consider today’s Politico revelation just marquee for a rerun of a tiresome old movie: one set of rules for Congress and another set of rules for the rest of us.

If Congress quietly wants to exempt itself from Obamacare, that’s great—so long as it includes the rest of us in that midnight amendment.

Damage control efforts are already underway.  When the establishment gets caught with its hand in the cookie jar or with its fly open — or both things concurrently — it always turns to its friends at The Washington Post:

There’s a Politico story making the rounds that says that members of Congress are engaged in secret, sensitive negotiations to exempt themselves and their staffs from Obamacare.

If this sounds unbelievable, it’s because it is. There’s no effort to “exempt” Congress from Obamacare. No matter how this shakes out, Congress will have to follow the law, just like everyone else does.

Based on conversations I’ve had with a number of the staffs involved in these talks, the actual issue here is far less interesting, and far less explosive, than an exemption. Rather, a Republican amendment meant to embarrass Democrats and a too-clever-by-half Democratic response has possibly created a problem in which the federal government can’t make its normal contribution to the insurance premiums of congressional staffers.

See? This is getting boring already.

Here’s how it happened: Back during the Affordable Care Act negotiations, Sen. Chuck Grassley (R-Iowa) proposed an amendment forcing all members of Congress and all of their staffs to enter the exchanges. The purpose of the amendment was to embarrass the Democrats. But in a bit of jujitsu of which they were inordinately proud, Democrats instead embraced the amendment and added it to the law. Here’s the relevant text:

Let’s stop for a moment here and explain why this is unusual. Large employers — defined in the law as employers with more than 100 employees — aren’t allowed onto the insurance exchanges until 2017, and only then if a state makes an affirmative decision to let them in.

That’s where the problem comes in. This was an offhand amendment that was supposed to be rejected. It’s not clear that the federal government has the authority to pay for congressional staffers on the exchanges, the way it pays for them now in the federal benefits program. That could lead to a lot of staffers quitting Congress because they can’t afford to shoulder 100 percent of their premiums. (There’s also a smaller issue related to how retiree benefits might be calculated. But I’m only willing to go so far into the weeds here.)

You’ll notice a lot of hedged language here: “Ifs” and “coulds”. The reason is that the Office of Personnel Management — which is the agency that actually manages the federal government’s benefits — hasn’t ruled on their interpretation of the law. So no one is even sure if this will be an issue. […]

This isn’t, in other words, an effort to flee Obamacare. It’s an effort to fix a drafting error that prevents the federal government from paying into insurance exchanges on behalf of congressional staffers who got caught up in a political controversy.

*Nothing to see here.  Move along.  These are NOT the droids you are looking for.*

One thought on “On The Hill, the rats are jumping from the sinking U.S.S. ObamaCare …”