I gave up on NC Spin several months back.  For those of you not familiar with this program, it is WRAL commisar Jim Goodmon’s attempted knockoff of the McLaughlin Group.  Except Jim’s version involves Democrat hacks Tom Campbell and Chris Fitzsimon doing their best Baghdad Bob impression — regurgitating state-run media propaganda while John Hood and some other token Republican / conservative sit quietly off to the side.

Somebody urged me to watch this weekend’s installation of the show.  Apparently, Chris “The Mad Blinker” had a pretty hysterical meltdown toward the end of the show.  (The fun starts at about the 19:45 mark.)

This week, Grandpa Tom and Gollum’s stunt double were spreading disinformation about Attorney General Roy Cooper’s “investigation of Republican legislators.”  First, this investigation is little more than a ploy by Cooper to try to hang on to his fiefdom. 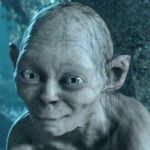 Second, the “investigation” is over campaign contributions a gambling operation owner indicted in other states gave to North Carolina legislators of both parties. There is no evidence that the donor broke any North Carolina law.  There is no evidence that his money got him any kind of quid pro quo with the legislators.  There is no THERE there.  Democrats want to conveniently overlook the multitude of Democrats who took money from this man — and Tom and Chris want to help out.  Of course, Hood and this week’s token Republican — Doug Raymond — sat quietly by while Chris and Tom spat out this garbage.

At the most interesting part of this week’s show, Campbell was regurgitating Moral Monday talking points about “oppressive” building access restrictions approved by Republicans.  Raymond spoke up to mention that Republicans actually liberalized the rules from when  Democrats ran Jones Street.  That set ol’ Chris off.  He started blinking at super-sonic speed and talking over Raymond.  Instead of recognizing good TV and letting it continue, Grandpa Tom sends the show to commercial.  The show comes back and Chris is hissy-fitting all over Hood and Raymond.  Hood and Raymond stuck it right back at Fitzsimon. And the Blinker went into full pout mode.  Mr. Goodmon! Niles and Frasier are being mean to me again!

Tom: you are on to something here, old man.  Instead of shutting this kind of thing down — let the boys GO AT IT.  Step in if they start talking over each other like on Fox News or MSNBC.  You might get some great TV for a change — kind of like what happened here on the old Morton Downey Show with Al Sharpton and Roy Innis.

2 thoughts on “NCSPIN: Blinkin’ & Bitchin’. (Now THAT is quality television!)”