It is absolutely astounding that a major political party in this country is openly advocating the obstruction of a federal law enforcement agency’s work.  It’s even more astonishing that Governor Roy Cooper – our state’s most recent past chief law enforcement officer –  is taking a leading role in this obstruction. 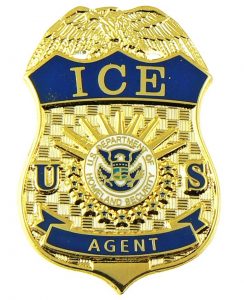 Leftists  have made it their mission over the years to hammer home the importance of respecting the federal government.  We fought a war over that question in the 19th century.  In the 1950s and 60s,  leftists hammered home the message that the federal government’s mandates on civil rights had to be followed to a tee.

Fast forward to 2019,  and we have leftists comparing a federal law enforcement agency — ICE — to Hitler’s Gestapo.  Leftists are openly calling for resistance to ICE — the agency charged with protecting our national borders and enforcing our immigration laws.  Leftists in Wake and Mecklenburg counties have even elected sheriffs who openly pledged to not cooperate with ICE.  If ICE alerts either of those departments that they have a person of interest to ICE in custody,  the local sheriffs will refuse to hold the suspect until ICE can arrive.

Imagine.  A sheriff who can pick and choose what laws he will or will not enforce.  I sure thought we confirmed that as a bad idea in the 1950s and 60s.

Well,  the General Assembly has passed legislation mandating that sheriffs cooperate with ICE or risk being removed from office.  Ol’ Roy has vetoed that bill,  suggesting that it “divides North Carolinians.”   (I don’t believe we’re talking about North Carolinians here.  It’s more like a lot of Mexicans, Guatemalans and Hondurans who sneaked across the border and are likely partaking in identity theft and not paying taxes. )

Cooper and his fellow nuts want to demagogue and play politics with our safety and national security.  Here’s ICE with plenty of cold hard facts to demonstrate just how foolish our governor and the Mecklenburg County sheriff truly are:

U.S. Immigration and Customs Enforcement (ICE) arrested fugitive Oscar Pacheco, 33, a Honduran national, and repeat immigration violator during a targeted enforcement operation in Mecklenburg County August 9, nearly two months after the Mecklenburg County Sheriff’s Office refused to honor an ICE detainer, or even notify ICE of the release, and instead released Pacheco from local criminal custody following his arrest on first-degree rape and indecent liberties with a minor charges.

By releasing a previously deported alien facing serious criminal charges, Mecklenburg County chose to release a serious public safety threat onto the streets of Charlotte where he was free to potentially harm others for nearly two months until his capture by ICE.

Pacheco was previously removed from the U.S. to Honduras in July 2006, and he subsequently illegally reentered the U.S. after deportation, which is a felony act under federal law. After the resolution of any potential federal criminal charges, he is subject to removal again to Honduras.

Pacheco was arrested by the Charlotte-Mecklenburg Police Department for First Degree Rape and two counts of Indecent Liberties with a Child on June 14. ICE issued a detainer June 15, but the detainer was not honored, and Pacheco was instead released from Mecklenburg County custody June 16.

ICE’s Charlotte Fugitive Operations Team (FUGOPS) located and arrested the man without incident August 9 and he remains in ICE custody.

This arrest is simply the latest in a continuing list of unlawfully present foreign nationals released from Mecklenburg County custody over the past nine months despite serious criminal charges that pose a clear threat to public safety. […]

8 thoughts on “#ncpol: Cooper, his nutty followers side with illegal alien criminals”