What is it about white Democrat politicians running away 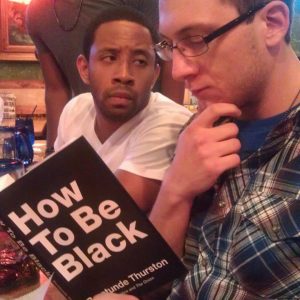 from what they are? We heard about one white Democrat legislator ashamed of being white. It sounds like we’ve got another one on our hands:

Asked about promoting diversity in North Carolina, a candidate for the state House said it’s not something he needs to talk about — because he’s lived it as “a member of the African-American community.”

Gary Shipman, one of three Democrats hoping to challenge Republican Rep. Holly Grange in a House district in New Hanover County, told the crowd at a park in Wilmington on Sunday that he has empowered members of the gay and black communities through his work as an attorney and official in the Democratic Party.

“I’m a member of the African-American community,” said Shipman, who is white. “I’ve been where you are. I’ve been in your communities.”[…]

(*M’kay.  If things go well for Shipman here, he and that weirdo Graig Meyer

can start their own special little caucus.* )

On the other hand, WHY NOT?  After all, we’ve got allegedly serious, credible elected leaders and judges who want us to believe GENDER is something  you choose — not something you’re born with.  *If, like Shania Twain, you feel like a woman, YOU’RE A WOMAN.*

THIS 38 year-old guy in Illinois tried to beat child molestation charges by claiming he was really a 9 year-old trapped in a man’s body.

Up is down.  Black is white. Night is day. Day is night.  Welcome to the liberal utopia.