The,um, generosity of beer wholesalers to legislative campaign funds keeps paying off.  Regulatory restrictions on craft beer startups just can’t manage to make it through the maze on Jones Street.  And the maze seems to get trickier to navigate — passing through a lot of backrooms, even — as the campaign contribution checks get bigger.

Jim Black took pay-to-play to an art form in the House.  Thom Tillis derailed craft beer deregulation  bills while he was speaker and raising money for his US Senate run.    Now, Speaker Timmy and his team appear headed down that road paved by Big Jim and ThomT:

Charlotte’s two biggest craft brewers appear headed to court after a campaign to raise their production limit collapsed in the face of opposition from North Carolina’s influential beer wholesalers.

Olde Mecklenburg and NoDa breweries have spearheaded the so-called Craft Freedom fight, a bid to raise the 25,000-barrel cap on production before craft brewers must enter a distribution contract with a wholesaler.

But House Bill 500, which would have raised the cap to 200,000 barrels, was gutted Wednesday, barely three weeks after it was introduced amid fanfare and support from the state’s more than 200 craft brewers.[…]

“I’d say it’s disappointing, but disappointing doesn’t do it justice,” said John Marrino, owner of Olde Mecklenburg. “It’s outrageous. It’s backroom politics. … I’m not sure the General Assembly is the best avenue to ensure the success of the micro-brewery industry in North Carolina.”[…]

*Beautiful.*  The alleged conservative party is throwing up roadblocks to entrepreneurs trying to grow their businesses and stoke some economic growth.  MORE:

[…] If the 25,000-barrel cap remains in place, Marrino said he won’t be able to build a planned second brewery in Cornelius.

Todd Ford, owner of NoDa Brewery, said, “Apparently our only path to success is going to be a legal one.”

The two brewers and their advisers plan to meet Thursday with former N.C. Supreme Court Justice Bob Orr to explore their legal options.

Meanwhile, Tim Kent, executive director of the N.C. Beer & Wine Wholesalers, called the bill change “a positive step in the direction we were hoping for.”

The quick collapse of the brewers’ bill demonstrates the political strength of the wholesalers. Through its executives and political action committee, the wholesalers have given lawmakers nearly $1.5 million in political contributions in the last four years, according to Democracy North Carolina.

Lawmakers were told earlier this month that nearly a quarter of craft breweries were not in compliance with excise tax reporting. And critics of raising the cap were named to the Alcoholic Beverage Committee, which heard the bill. One was House Majority Leader John Bell, who received $4,000 from the wholesalers’ PAC. 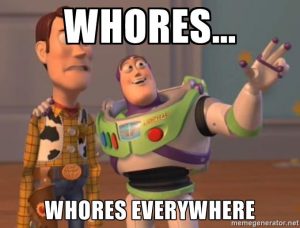 The BEST government money can BUY.  These people are NO BETTER than the riffraff we tossed out in 2010.  NO BETTER.

Just listening to them, you’d think the Democrats were in charge on Jones Street.  (If this crap keeps up, they just might find themselves in charge again in 2019. )