to some of those ladies he and his comrades claim to speak for:

That’s when she says Hall, a nascent star in the North Carolina Democratic Party and a state representative, ran into her at the Anchor Bar in Raleigh.

Hall, 51, was looking for a new legislative aide for his office. White, a top campaign official with multiple Democratic candidates for the state legislature, said she spoke with the lawmaker about the vacancy.

*Too pretty.  OUCH. That had to hurt.*   So far, there is no crime here other than just being crude and rude.  (Just imagine the trauma Jessie would have experienced conversing with Bob Steinburg.)

But the story goes downhill for ol’ Duane from there:

[…]But, behind the scenes, Hall has a reputation for more than his political prowess. Including White, five sources—some of whom requested not to be named for fear of repercussions in their current jobs—detailed persistent sexual innuendo from the three-term legislator and, in some cases, repeated, unwanted sexual overtures. Policy Watch knows the identity of the alleged victims, but has not published their names without their consent.

Wow.  A guy molesting a female at a LGBTQ-XYZ function. (How often does THAT happen ????)  Talk about chutzpah — cojones. 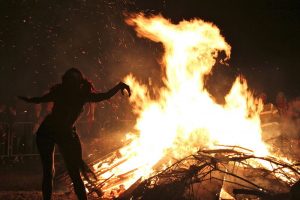 A good rule of thumb to follow: If you wouldn’t say it or do it in front of your mama or grandma, it’s a good idea to not do it.  (Example: dragging a lady around the room by her ponytail.)

Meanwhile, Democrats are flooding social media with calls for Hall to resign.  They thought they were going to have free reign to wrap Roy Moore around every GOP candidate this Fall.   (That burning smell you detect is a huge raging bonfire behind NCDP HQ fueled by a bunch of printed material with the failed Alabama Senate candidate’s name on it.)

Before Republicans get too giggly about this, they need to remember that ungentlemanly / unladylike crude behavior and harassment is a bipartisan problem.  (I am willing to bet that — upon hearing this story — at least one senior Republican on Jones Street is walking around with some tightly-puckered bodily orifices.)

This behavior problem comes from these people believing they are some kind of royalty lording over peasants.  They’ve forgotten — and we’ve let them — that they are there on Jones serving at our pleasure.  They are our employees.