Our Accidental Governor™ has signed H589 on the dotted line.  The solar goons get even more years at the trough.  The alleged “conservative revolution”

in Raleigh is now on the hook for (1) jacking up utility bills, and (2) endorsing the idea of government subsidies of failed business models.  Who needs a Democrat majority on Jones Street when you have this crowd — that can be bought off with a few dollars — in charge?

Thanks to Timmy, Nelson, Dave, Phil and the boys, Roy Cooper can campaign for reelection claiming he walked across the aisle and got things done:

Gov. Roy Cooper has signed a bill establishing competitive bids for most utility-scale solar projects in the state despite the bill’s controversial moratorium on wind permits added to the bill by the N.C. Senate.

He praised the painstaking, months-long effort that led to the compromises on solar in the original bill, At the heart of those compromises was the competitive bidding process Duke Energy sought and a commitment from Duke to seek 2,660 megawatts of new renewable energy bids through mid-2021.

“This bill is critical for the future of significant increases in our already booming solar industry,” Cooper says in a prepared statement.

“I strongly oppose the ugly, last-minute, politically motivated wind moratorium,” he says. “However, this fragile and hard-fought solar deal will be lost if I veto this legislation and that veto is sustained.”[…]

Here’s environmental expert John Droz dropping some of his usual common sense into the discussion:

Yesterday Governor Cooper signed into law, H589. He added an Executive Order regarding wind energy, but IMO that is simply a meaningless gesture to appease some of his political constituency. (BTW, the Governor’s EO-11 is inaccurate when it promotes wind energy as being reliable and inexpensive.)

While waiting for his signature, we were trying to investigate the key justification of the supporters of this bill: “that H589 would save NC ratepayers some $850 million.”

Even though I was a H589 “stakeholder,” and even though I submitted multiple requests to a primary sponsor of the bill, I only saw a document “explaining” the calculation of these savings 2± weeks ago! It came from Duke Energy.

After looking it over, several questions came to mind. I sent ten of those queries to the official Duke Energy representative to answer. Despite several polite followups with that person, so far she has only answered three (3) of these reasonable key questions. One possibility for this non-responsiveness is that they are embarrassed to show all their speculations.

From what I know so far, these are my conclusions:

1 – The “$850 million in NC ratepayer savings” are based on purposefully biased assumptions. For example, important numbers (like solar capacity, like avoided costs, etc.) have been consciously selected to produce a higher number.

IMO using more conservative and realistic assumptions, the so-called “savings” (under their artificial scenario) would be about 50% of what they are claiming.

2 – More importantly, the whole solar scenario that they are basing these “savings” on is an arbitrary, contrived, and undesirable set of assumptions. The truth of the matter is that when juxtaposing their scenario to what could have been done, the solar provisions of H589 are a major net financial liability to NC ratepayers.

This can be seen by comparing some of the other options that were readily available. If in fact the proponents of H589 were really interested in saving NC ratepayers money, then:

b) Why didn’t H589 simply reduce the amount of expensive unreliable NC solar purchased, by lowering the Senate Bill 3 (2007) mandate?

d) Why didn’t H589 just address fixing the main “PURPA issues” — e.g. by shortening contract periods? (NC has the highest PURPA costs in the country, so it is NC rules and PURPA interpretations that should have been corrected to fix that obvious inequity.)

The fact that none of these options were in H589 is proof positive that it was NOT the objective of this bill to benefit NC ratepayers — despite self-serving claims to the contrary. […]

Interestingly, Droz appears to see the bill’s passage as the result of Duke Energy teaming with the solar goons to squeeze the honorables on Jones Street:

[…] My assessment of what happened here is that Duke Energy was getting financially pinched by the excessive solar that was being installed in NC, primarily due to unreasonable economic terms and conditions imposed by NCUC. Duke made a few efforts to fix this, but (due to the power of the NC solar lobby) they were unsuccessful.

Plan B for Duke Energy was to join forces with their opponent, the solar proponents (see this). The plan appears to have been to get the solar lobby to agree to giving Duke some financial relief, and in exchange Duke would support non-sensical things like an increased mandate for even more NC solar.

Of course in the bargaining between these two heavyweights, no one was representing the rights of citizens and ratepayers!

The end result (H589) naturally had the support of the state’s Democrat legislators, as they endorse more solar entitlements.

The questions are: why was this unscientific entitlement bill sponsored by House Republicans, and why did several Republican House legislators then supported this charade?

The first explanation is that the solar+Duke lobby is a powerful force, and many state legislators were simply yielding to the very strong push by those lobbyists.

The second explanation is that H589 is a technical matter, and that few state legislators actually have a clear understanding of the issues and implications of this important bill. In these cases most legislators defer to their leadership for direction.

IMO in such a situations Republicans should have referred to their official State Platform, and then voted accordingly (i.e. against any bill that is contrary to free market enterprise — like H589). The State GOP platform does really mean something, right? 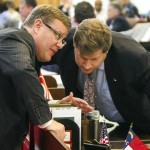 The third explanation is that the Senate version had the 2 year Wind Energy Moratorium. Most Republican Senators felt (understandably) that this was compensation for the unwarranted solar handouts. (Note that the wind Moratorium was not in the House version of H589, so this explanation does not apply to Republican House members.)

The bottom line is that the whole H589 fiasco shows how often special-interest forces control our government, and why it is exceptionally important for citizens to get educated, organize and speak up if they want their rights to be protected.

Ain’t that the truth?

5 thoughts on “#ncga: Cooper signs on to keeping solar goons at the trough”