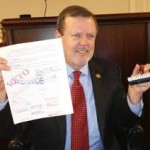 The “conservative revolution” rolls on.

We’re seeing and hearing all kinds of ads promoting speaker Thom Tillis’s leadership on Jones Street. Yet, most of the recent reports from that jurisdiction feature terms being dictated by senate president pro tem Phil Berger and his pit bull, Rules Committee chairman Tom Apodaca.

The Senate has sent two items of interest over to Tillis’s House: (1) a provision that funds more corporate welfare, limits local sales tax increases AND loosens the fiscal belt for public schools, and (2) three options for adjourning.  Here’s the scoop:

A budget fix that school districts desperately want that will allow them to go this year without cutting teacher assistant jobs passed the state Senate on Thursday night.

But the Senate has tied the budget fix to a bill the House doesn’t want, a measure that creates a new incentive fund for the Department of Commerce to use to lure businesses.

The budget fix and the business incentives are in separate bills, but the budget correction is triggered only if th 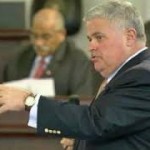 “We want to see both happen, and we don’t want to wait around until next week to see it happen,” said Sen. Tom Apodaca, Senate Rules Committee chairman.

The corporate welfare is disappointing.  The legislative research division has clearly demonstrated that the state has much better economic growth activity from tax cuts than it does from handouts. Handing out corporate welfare allows politicians to toot their own horn to the media and the huddled masses back home about how THEY “created” jobs.

We like the idea of limiting sales tax increases. Far too often, local governments use that ploy to fuel their spending habits — shaking down visitors to their communities, rather than residents.  But increases sales taxes jack up costs and end up hurting sales at local businesses. These limits could help to teach local governments to live within their means.

It’s too bad we’re not offering any of those lessons to the public schools or state government.  Local school board offices, while shaking us down for money,  can still load up their bureaucracies with six-figure pencil-pushers — trapping way too much money at levels above the classroom, where it is arguably much more needed. MORE:

The Senate has pushed hard for the bill creating the new incentives program, and it’s something Gov. Pat McCrory also wants.

But the House has been skeptical of the Job Catalyst Fund, a program to be controlled by the commerce secretary. The budget set aside $20 million for the fund.

The House failed to agree to the bill earlier this summer.

“You’re playing political games,” said Sen. Josh Stein, a Raleigh Democrat, “You’re saying to the House, ‘You have to fire TAs or put up with our bad bill.’”

Nope. Nice bit of demagoguery there.  Budget line items are determined and personnel decisions are made by local bureaucrats and school boards.  MORE:

The legislature still has not formally adjourned its short session, though members have not worked full time this month.

House Speaker Thom Tillis said he’d spoken to the Senate about the incentives and budget-fix bills but was not certain what the House will do with them.

Both the House and Senate meet Friday.

One resolution would have the legislature end its business this year and not return until next year.

The second resolution would have the legislature leave until November, when members would come back to consider a Medicaid overhaul.

The third alternative would have members leave until November, when they could return to consider Medicaid, bills connected to lawsuits, and confirmation of special Superior Court judges. The third alternative would also allow legislators to consider bills on which negotiators are trying to work out a compromise, which would put proposals for closing coal ash disposal sites back in play.

One thought on “#NCGA: Are you ready for some hardball? (More spending, too?)”