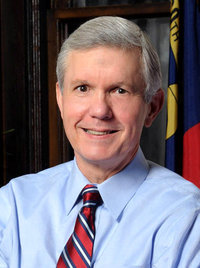 The parody site, called TeamMcCrory.com, features a video that makes a BIG deal out of McCrory business dealings that look A LOT like lobbying.

Well, the crotch-punchers might want to do some good hard thinking about Elizabeth Dalton Robinson, their gubernatorial nominee’s daughter, before continuing down this particular road with Mayor Pat.   According to her own LinkedIn profile, she got hired RIGHT OUT of school in 2002 by Roger Bone, arguably the most powerful, influential lobbyist in Raleigh.  Conveniently, Daddy Dalton was also a powerful member of the state Senate at the time, with ambitions of moving up in the world.

In 2004, Elizabeth Dalton became director of governmental affairs (translation: head lobbyist)  for the NC Chamber of Commerce.  In 2006, she became director of governmental affairs for the NC Retail Merchants Association, which — according to LinkedIn — is where she sits today.   Daddy got elected Lieutenant Governor in 2008, which let him continue to be a big dog in the state Senate, until the GOP took over in 2010.

What about the potential for undue influence HERE?  Imagine the following suggestions being made to business leaders:  Your interests will have a much better chance of passing through the senate if you hire Elizabeth Robinson.  If you want to get the ear of Senator / Lt. Governor Dalton, you really need to hire Mrs. Robinson.

It all looks funny. Everything may be completely above-board with the Dalton clan.  But here we are picking on Pat McCrory for taking a job with a law firm that does lobbying, and Thom Tillis for having some employees who dated lobbyists.

The steno pool in the N&O newsroom needs to examine the Daltons’  professional relationships to see if there is ANY “undue influence’ the people of North Carolina need to be concerned about.