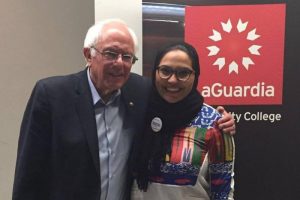 She’s a full-blown head-scarf wearing Muslim.  She thinks Hillary Clinton is too conservative.   Now, Nida Allam is third vice-chairman of the North Carolina Democrat Party.  The political party of radical feminism is giving a bear-hug to a religion that thinks it’s cool to stone women to death for (a) driving cars, (b) going out alone, and (c) appearing in public without a head covering.

The same party that sneers at Christians as “bigots” is embracing a religion that STILL to this very day celebrates beheading non-believers.  (I don’t hear Jews, Catholics or Protestants doing or saying anything like that.)

Here are some findings from The Pew Research Center:

More generally, Muslims mostly say that suicide bombings and other forms of violence against civilians in the name of Islam are rarely or never justified, including 92% in Indonesia and 91% in Iraq. In the United States, a 2011 survey found that 86% of Muslims say that such tactics are rarely or never justified. An additional 7% say suicide bombings are sometimes justified and 1% say they are often justified in these circumstances.

To give you a feel for what we’re talking about — a 2016 estimate finds 3.3 million Muslims living in the United States.  (You do the math.)

While Christians preach love and helping those in need, you have Islamic clerics around the world preaching conquest of the infidels.

The N&O and other drivebys try their damnedest to paint humanitarians like Franklin Graham as bigots while defending the “religion” that flew those planes into the Pentagon and The Twin Towers, continue to bomb and ambush our soldiers and murder innocent civilians.

I know there are plenty of good Democrats out there.  Some of you have to be looking at stuff like this and wonder what in the hell is happening to your party.