It appears that NC Rep. Charles Graham (D-Robeson) joined D.A.-elect Matt Scott (D) and NC Senate candidate John Campbell (D) in shelling out cash to local politicians and other local folks to do pretty much the same stuff 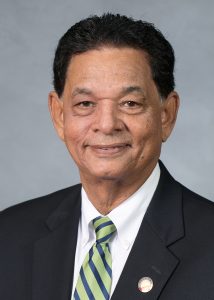 McRae Dowless is being scrutinized for next door in Bladen County.

The Graham campaign reported receiving a $5000 check from The North Carolina Democratic Party on November 1.   (Election Day was November 6.)

If you then refer to Graham’s Q3 campaign report, you’ll see a number of disbursements for GOTV to pretty much the same cast of characters we saw in the reporting on Scott and Campbell.

In Robeson County (and that part of the state), GOTV primarily means ballot harvesting and hauling — driving around in vans scooping up any and all warm bodies, with drivers being paid per warm body delivered to the polls to vote.   In the third quarter alone, Graham reported spending $12,320 on GOTV (get out the vote).  His total campaign expenditures for that period was $22,896.17.

So, more than half the Graham campaign’s Q3 spending went to basically the same stuff McRae Dowless is accused of doing.

So, let’s review the sketchy players we know of just in Robeson County:  the Scott campaign, the Campbell campaign, the Graham campaign, the DCCC, The Voter Participation Project,  and something apparently called “The Election Project.”   All ballot harvesting and / or hauling to help Democrats up and down the ballot.