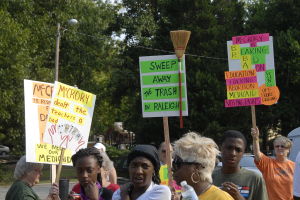 We’ve got a unique situation here in Moore County.  We are one of the most reliably Republican counties in the state.  Yet, our only local paper is owned and operated by the same Democrat operatives who owned and operated The Raleigh News & Observer for years.  They got seriously overpaid by McClatchy for The N&O — so they really can afford to lose some money peddling leftist drivel to this overwhelmingly GOP market.

This week, our Lu Xun Award-winning local paper swooned over the recent visit by Bill Barber and his rabble. The editorial team suggests that all of us Republicans could learn from the bloated jheri-curled bloviator and his mob:

The 300 or so people who turned out for this week’s Moral Monday protest in Southern Pines were hardly a match for the thousands who have participated in similar events in Raleigh.
Still, it was the most impressive gathering of its kind in recent memory in these parts. The spirit that prevailed there was awesome and compelling and impossible to ignore.[…]

The monhly dinner meetings for Moore Tea Citizens have an average attendance of 250-300.  No swooning about that. Why?  MORE:

As near as we could tell, there was not an “outsider” in the bunch, to use the condescendingly dismissive term that Gov. Pat McCrory applied to those taking part in the early Moral Monday gatherings in the state capital.

No outside agitators. No radical troublemakers or provocateurs.[…]

Oh, so you checked IDs?  (I thought you guys told us that was racist, fascist and anti-American?) And what about Bob Etheridge? ABC 11 found him at the rally.  I’d say this video clearly puts him in the “outside agitators — radical troublemakers — provocateurs” category.  MORE:

Indeed, the vast majority of those present in Downtown Park were local and white and peaceable and middle-aged or older, all brought together by a shared sense of outrage at the shameful things that have been happening politically and governmentally at the state level since the beginning of the year.

Really?  The picture which accompanies this post — and ran in your paper — suggests otherwise about the demographics of the gathering.  And “Shameful things” happening in Raleigh? You mean, like the speaker of the House getting busted for taking bribes in a restaurant bathroom?  Or the governor being indicted in federal court?

Notably missing from the gathering were the very people who should have been there — and who, if they approached it with an open mind, would have benefited the most from listening to the eloquent and heartfelt messages going forth from the speakers’ stand. We’re referring to the members of the Republican majority now in control of the General Assembly — and of the McCrory administration itself.

Together, acting hastily and often for vindictive and poorly-thought-out reasons, these are the ones who have done so much harm to the state that was once the pride of the South. If they would simply listen to what’s being said at rallies like this, instead of attempting to discredit the participants and call them names and the tribute ignoble motives to them, they might learn a thing or two that they need to know.

They should have wandered quietly and open-mindedly around the edges of the crowd, carefully reading the signs with messages such as, “My Education is Priceless — Why Treat Teachers Like They Are Worthless?”

Oh?  And how does the “Sweep The Trash Out of Raleigh” sign — again, featured in YOUR photo —  add to the grace and beauty of the event?

Who knows? They might even have found a bit of inspiration in the invocation offered by the Rev. John Tampa, who made clear that he was speaking for himself and not necessarily for his congregation at Emmanuel Episcopal Church in Southern Pines.

“Strengthen those who spend their lives striving for equal protection of the law and equal opportunities for all,” Tampa prayed. “Help us in the midst of our struggles for justice and truth, to confront one another without hatred or bitterness, and to work together with mutual forbearance and respect.”

Most of all, they might have found themselves deeply stirred by the keynote address delivered by the Rev. Dr. William Barber, president of the North Carolina NAACP.

Expressing outrage at the legislators’ meat-ax approach to changes in abortion laws, election laws, education policies and state budgets, Barber asked: “Will we go forward into the New South, or will we go back into the old solid South?”

It is an all-important question, to which all thinking North Carolinians should be demanding an honest answer.

Meat-ax?  The budget spends $400 million more than the last one.  Most of that new spending goes to public education.  Again, what’s so outrageous about making voters show their ID?  You guys at the paper apparently checked IDs at this rally.

Yes, ladies and gentlemen.  Another fine in-kind contribution to the decades-old pro-Democrat propaganda porfolio compiled by a Daniels-owned and operated media enterprise.