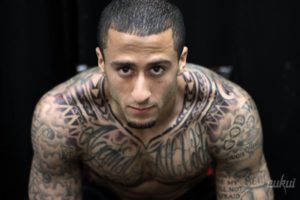 I can remember admiring 49er QBs Steve Young and Joe Montana.  Those guys were class acts and great talents.  Any disgust you had for the antics of the city of San Francisco could easily be softened by their on- and off-field performances.

For those of you who have winced at some of the antics of Panthers QB Cam Newton, the current QB of the 49ers,  Colin Kaepernick, is making ol’ Cam look like a piker:

On a night that was supposed to be significant for what 49ers quarterback Colin Kaepernick did on the field, what he didn’t do while off the field will create even bigger headlines.

During the playing of the national anthem, Kaepernick sat.

The 49ers have confirmed that Kaepernick did not stand for the anthem, and they have issued the following statement.

“The national anthem is and always will be a special part of the pre-game ceremony,” the team said in a statement issued to PFT. “It is an opportunity to honor our country and reflect on the great liberties we are afforded as its citizens. In respecting such American principles as freedom of religion and freedom of expression, we recognize the right of an individual to choose to participate, or not, in our celebration of the national anthem.” 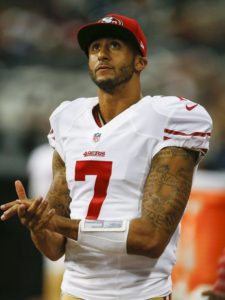 *Nice try.*  But the boy-genius QB for the Niners decided to open his mouth and worsen the situation:

It’s unclear why Kaepernick sat. However, Kaepernick retweeted the following message on Thursday, which accompanied images of the American and Confederate flags: “The fact that you really believe that there is difference in these flags means that your [sic] ignoring history.”

If you don’t think there is a difference, you likely slept through history class while that whole 1861-1865 kerfuffle was discussed.  MORE:

At a time when NFL players are criticized for not speaking out on social issues, Kaepernick has provided a very significant and conspicuous gesture. As the team noted, it’s his right to do so. But given that Kaepernick opted to make a stand by sitting during the traditional pregame honoring of the country and its flag — which is so tightly woven into the DNA of the NFL — there surely will be a reaction.