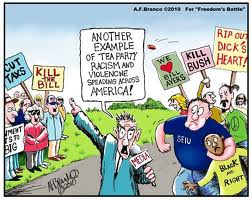 One good way to really stoke the wrath of Leftists is to separate them from the government teat.

A good example of this is the two-year drama surrounding the Wake County school board.  Since the moment the last vote was counted in 2009, and a conservative majority took power on the school board, the professional Left has been going foaming-at-the-mouth berserk.

The target of the Leftists’ anger was the plan by the new majority to start assigning kids to schools relatively close to where they live.  Sound reasonable?  Of course.

But think about it like a Leftist.   To these guys, education is NOT about teaching.  It’s one big real-life Pac-Man game: speeding around a maze gobbling up as much tax money as possible.

“Education” funding gets awarded based on overall average test scores.  If you allow the kids from middle-class and upper-middle-class families to attend schools near where they live, and poor kids to attend schools near where they live, you will have some schools not meeting government funding standards and being at risk of having the cash spigot turned off.  To leftists, it is better to spread kids out all over and have ten mediocre schools barely meeting government standards, than to have four performing at outstanding levels, four barely making the cut, and two below standard.  If you dare to question any of that, you get hit with the epithet of the “New McCarthyism”: RACIST.

To regain their control of the cash spigot, the Left teamed up with their useful-idiot partners-in-crime in the N&O newsroom to pound the school board majority into submission.  Instead of a thoughtful discussion of the issues, we were treated to coverage of the school board as though it was a partisan battle.  We got stories about the personal failings of members of the board majority.  (It is amazing that none of the leftist minority members had any newsworthy skeletons in their closets.)

Speaking of useful idiots,  the NAACP got involved and started screaming about “diversity” and “racism.”  You would have thought the Klan had taken over the Wake County school  board. (Kind of like how the Klan took over the NC Democrat Party and the state government during Reconstruction. But that’s for another post.)

This morning’s coverage by the N&O featured the state Democrat Party chairman crowing about the defeat of the school board chairman:

“Congratulations to Susan Evans for defeating tea party ringleader Ron Margiotta,” David Parker, chairman of the state Democratic Party, said in a written statement. “I have no doubt that Susan will work hard to restore the confidence, trust and integrity lost under Margiotta’s failed leadership. Ron Margiotta’s days of making Wake County Schools the butt of national jokes is now over.”

Nice.    Are things so bad at Democrat HQ that a local school board race is ALL they have to get worked up over?  I guess so.  They lost the legislature.  In 2012, they are going to lose their buffoonish governor, their majority in the congressional delegation, and their president.

You know what was missing from this story? The kids. We are hearing so much about how the Ds beat the Rs and how “diversity” is getting preserved.  How is ANY of this noise from the last two years going to improve the preparation of our kids to go out and perform in the real world?

Lesson for conservatives:  We need alternative methods for getting out our message out past the noise being generated by the N&O, state Democrats, the teacher union, and the other assorted members of the Leftist coalition.

The N&O beat on their former employee,  U.S. Senator Jesse Helms, relentlessly.  They endorsed his opponents every six years.  Helms financed his own PR campaign through the National Congressional Club, and got five terms in the U.S. Senate.  The left beats on Art Pope.  He has the money to defend himself through his various organizations.  Rush Limbaugh and Glenn Beck have their own networks / channels for disseminating their messages.

We got fired up in 2009, and worked hard to achieve great victories in 2010.  The danger is sitting back, and resting on your laurels.  The Raleigh vote yesterday is an example of what happens when conservatives get complacent and don’t punch back.

If we sit back and let the welfare state teat sucklers define us, we will quickly find ourselves back on the outside, powerless and even more frustrated.