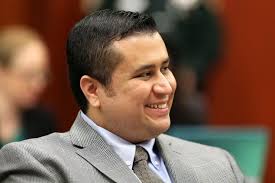 Well, it looks like the mainstream media and their lefty buddies didn’t quite get the widespread anarchy and chaos they were counting on in the wake of the verdict in the George Zimmerman trial.  We saw footage today of a couple dozen potheads breaking windows and vandalizing cars in Oakland, CA — but, from what we understand, that is a typical, daily occurrence there.

George Zimmerman — a white Hispanic (according to CNN) — was acquitted of all charges in the shooting death of 17-year old Trayvon Martin. People followed the proceedings of this case religiously.  The drive-by media told us this was the most important thing in the world — forget our collapsing economy, terrorism and all that stuff.

Talking heads dissected everything going on inside and outside the courtroom.  Al Sharpton and Jesse Jackson — par for the course — inflamed racial tensions.  Bill Barber was preoccupied elsewhere.

A local crime story was turned into a major drama about race relations in America.  We got a lot of coverage of Al & Jesse (The Justice Brothers), aided by selectively-edited footage aired by NBC.   Reverend Al would go down to Florida, whip up racial tensions, and then come back to do his talk show on NBC.  A paid employee of NBC stirring things up and creating news.

Instead of focusing on constitutional rights, and trying to educate viewers and readers on courtroom procedure, the drive-bys went the maximum demagoguery route.

People took to Facebook and Twitter in disbelief over the Zimmerman verdict.  How could you look at the facts, as explained to us by MSNBC, and NOT convict this guy?

Pull up a chair and let me fill you in.  I used to cover the courts beat, while a member of the drive-by media.  It appears that today’s media is even more irresponsible in its courtroom coverage than my former colleagues ever were.

First, news reports about courtroom action give you an awful lot of information that never gets shared with the jury. It may not fit the parameters of the charges being considered. It may not fit the rules and guidelines for courtroom decorum as defined by the judge.  Just because the bubble-head on the TV told you it was true DOESN’T MEAN it was true, or even a factor in the courtroom.

I would often go home after a day of watching courtroom proceedings, turn on the TV news, and not even recognize the events being recounted that supposedly occurred in the same courtroom I was in.

One major case I covered was the investigation of the murder of Michael Jordan’s father, and the ensuing trial of the suspects.  The case centered around Robeson County, in southeastern North Carolina.  Media flooded in from all over the country and the world.  Reporters from New York and L.A. and Chicago would find out I was from North Carolina, and would immediately start asking me about the Ku Klux Klan.  Why, you ask? If a black man gets murdered down South, it HAD to have been the work of the Klan.  Didn’t you see Mississippi Burning?

I explained several factors to these chuckleheads that put a dent in their narrative: (1) there had been NO reports of Klan activity  anywhere near Robeson County since the early 1950s, (2) North Carolina state government was thoroughly controlled by liberal Democrats, and (3) to achieve a position of power in Robeson County, you had to be a Democrat with the support of at least ONE bloc of voters outside of your racial group. (Robeson County is evenly split along racial lines between blacks, whites, and Native Americans.)   A scenario not all that conducive to a secretive Klan conspiracy. But, facts be damned, many media outlets ran with the racial angle.

CNN and NBC news were airing interviews with local racial shake-down artists — giving a national forum to demagoguery that would make Jesse & Al proud.  Insinuations were put out there that the prosecutor (a Democrat) was racist, and the sheriff (also a Democrat) was a drug dealer.

While that sideshow went down, I stuck to reporting on court filings and the details of the investigation.  I decided that I was going to treat the courtroom action like a sportswriter would treat a game — give your readers the feel that they were there in the middle of the action.  I offered up detailed, easy-to-read analyses of the action.  I mean, that’s what I was actually there to do.

As the trial proceeded, it became clear that the two chuckleheads arrested for the crime actually DID IT — and there was NO KKK conspiracy.  The two suspects were sent off to prison.  Families on both sides of the case were torn apart emotionally.  A community’s reputation was, basically, vandalized.  Public officials involved in the case had their reputations dragged through the mud.  And the drive-bys simply yawned and moved on to the next ratings bonanza.

The drive-bys will move on from Sanford, FL too, eventually.  Local residents will attempt to pick up the pieces and try to shake off their media-granted reputation as America’s racist hot-bed.  Ambulance-chasers will be pursuing George Zimmerman with civil suit after civil suit.  Lefty kooks and race-pimps are already threatening Zimmerman with retaliation.  He’s acquitted of all charges — but HOW can he get back to his normal life?

(Hopefully, he will be able to teach NBC and their ilk a lesson by suing the bejeezus out of them. Maybe he can disappear to a tropical island and live a quiet, happy life courtesy of lotsa drive-by money.)

One thought on “Legacy Media: Malpractice in the Courtroom”