We’ve had quite the political theater here in our sleep little resort town.  On one side, we have the retirees and housewives of the Moore Republican Women who just wanted to host Dr. Bill Warner, a renowned critic of Islamic fundamentalism, at their monthly meeting at the Pinehurst Resort.  On the other side, we have Sandhills Community College president John Dempsey and his buddies in the Moore Democrat Party trying to block Warner from even speaking.  I understand they’ve gotten rather aggressive with Pinehurst CEO Tom Pashley and have even threatened  to go to the USGA and PGA to pull their involvement with Pinehurst if Warner is allowed to speak on resort property.

And in the middle, we have our friend Tom Pashley and the world-renowned golf resort that provides our little village its name.

Moore Republican Women have invited Dr. Bill Warner to speak to its members and guests on May 15 at The Pinehurst Members Club on his topic “Political Islam.” The space at PMC has been under contract for many months.

In the last week, a few influential members of the liberal community have begun to pressure the PMC to cancel Dr. Warner’s appearance at 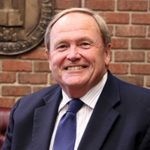 their venue. Dr. John Dempsey, President of Sandhills Community College, met with the Pinehurst CEO Tom Pashley to protest Dr. Warner’s appearance and additionally advised the Pinehurst Controller that Dr. Warner was “unstable.” This is the same Dr. Dempsey who has stated that he will not enforce HB 2 at the College.

Mr. Pashley has suggested that MRW should consider moving the venue to another location, either at PMC or off site, to avoid contact with members who have protested to him against Dr. Warner’s appearance. Pashley states that he continues to receive complaints from members, who also threaten to take their complaints to the USGA urging them to boycott Pinehurst for golf tournaments. Mr Pashley did state that he had watched Dr. Warner on YouTube and did not find his presentation objectionable.

I have had haranguing calls from opponents in the community who seem to be quite leftist. When I questioned them, they admitted to never having heard any speech or YouTube video of Dr. Warner’s. A reporter from The Pilot called to request comments for an article that she was preparing; however, I have

not had time to respond, and I hardly expect fair treatment by the extremely liberal Pilot. I understand that a negative Op Ed piece will appear in Sunday’s Pilot.

Although I have no evidence to back it up, I strongly suspect that CAIR and the Southern Poverty Law Center have had a hand in attempting to block Dr. Warner’s appearance, as they have done at other appearances that he has scheduled. The SPLC contends that Dr. Warner is a “hate speaker.” He is not. However, he is one who speaks factually and dispassionately about the history and practices of Islam to explain the apparent contradiction between a religion of “peace” and a religion whose documents preach enslaving captives, stoning women to death, and urging followers to commit atrocities.

I have contacted the members of Moore Republican Women and requested that they express support for Dr. Warner’s appearance to [Pinehurst Members Club].

I am contacting each of you to request that you support MRW by expressing to PMC and Mr. Pashley your displeasure at this obvious attempt to inhibit free speech.

Kay is one of the nicest, most diplomatic, easy-going ladies I’ve ever met.  You’ve got be quite the low-life to even get in her face.

You also have to ask what is going on with John Dempsey.  We’ve documented before that he hired a professional race-baiter / agitator as a vice-president for “diversity.”  She was charged with overseeing the leftist brainwashing and “sensitivity training” of college employees.   He also threw a fit in his buddy David Woronoff’s paper about how he was going to quit if the college’s board made him keep boys out of the girl’s restroom.  Now here he is trying to (1) bully one of the real assets to our community, (2) stomp on the First Amendment, and (3) carry water for the ‘Allah-Akbar-KABOOM’ crowd.

Dempsey’s been at the college a loooooooong time.  Maybe it’s time to start looking at , um, “retirement” and gearing up a search committee.

Later in the day, it appeared that Pashley and Pinehurst shrugged off the efforts of Dempsey & co.  Here’s Ms. Kay:

Update: Mr. Tom Pashley just called to say that MRW is welcome to hold Dr. Warner’s presentation in the St. Andrews Room, located in the Golf Center immediately next to the Members Club.

We will use the normal valet parking but will direct

members and guests next door. The advantage of the St. Andrews Room is that it has doors that can be closed to make the event private. This is the same room that we used when the Members club was under renovation.

I understand from a very reliable source that Democrats have mounted an aggressive campaign to complain to the resort management.

I thanked Mr. Pashley and others involved in the decision for taking a principled stand.