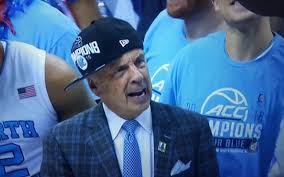 For many of us native North Carolinians, Carolina basketball has been something special.  It’s long been a powerful unifying force that brought the folks living in the BIG HOUSE together with the folks doing the yardwork around the BIG House together.

The late great Dean Smith was a huge liberal.  But he wasn’t out there publicly shoving his personal political beliefs down the throats of his team’s fans.  I think Coach Smith understood that Republicans AND Democrats cheered his team on and donated to his program.  Michael Jordan was also a big liberal. He was once famously quoted saying, in response to his lack of open political activism, that “Republicans AND Democrats buy tennis shoes.”

But Roy Williams hasn’t hesitated to speak his mind.  From telling a CBS camera crew he didn’t give a [expletive]  about North Carolina,” to giving aid and comfort to the #BoycottNorthCarolinatiltranniescanusetheladiesroom crowd, Ol’ Roy — the head coach version — has really taken some opportunities to, um, step in it.

I’ve got some personal experience with Coach Williams.  I spent the summers of my 7th and 8th grade years at Carolina Basketball camp.  (I was undergoing quite a vertical growth spurt at the time. Dad thought it was a good time to get acquainted with a basketball.  I stuck with the game until my growth became more of the horizontal nature, and then switched to football. )

Both summers, bottom-of-the-barrel graduate assistant Roy Williams was the counselor leading my group.  (Not a grey hair to be seen then.)    I swear — studying under ol’ Roy had me thinking I had mistakenly signed up for Marine boot camp.  He honestly seemed to be the second-coming of Bobby Knight.  Coach Smith occasionally stopped by to visit our group.  He was always the soft-spoken good cop to Ol’ Roy’s bad cop.

Based on those experiences, I could never have imagined Ol’ Roy going native in Chapel Hill.

In the wake of his team’s 2017 championship win, we’re now getting THIS from Ol’ Roy: 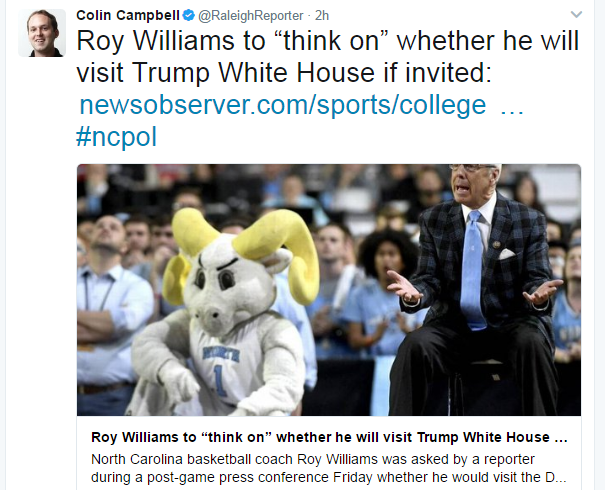 Why would you want to deny your kids the thrill of visiting with the President of the United States in The White House? Talk about an experience of a lifetime.

(Maybe Trump won’t invite him.  Or maybe invite the whole team BUT him.   Maybe Gonzaga would like to go?)

We shell out our money to hear singers sing and watch actors perform. NOT preach about politics.  We all know Roy lives among a bunch of nasty liberals right there in Orange County.  But who spends their time in front of the TV, or shells out their money for tickets, to hear Ol’ Roy regurgitate the leftist stupidity he hears around the Chapel Hill cocktail party circuit?

Who does the man think he is?  Chairman of the Wimmen’s Studies department at the university, or something?

9 thoughts on “Is Chapel Hill eating away at Ol’ Roy’s brain?”