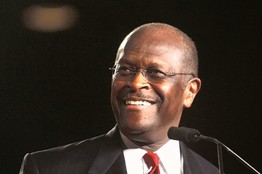 Dr. Arthur Laffer, the brains behind supply-side economics and many of the policies that led to the boom of the Reagan era, has an interesting piece in today’s Wall Street Journal favoring tax reform ideas like presidential candidate Herman Cain’s 9-9-9 proposal:

It used to be that the sole purpose of the tax code was to raise the necessary funds to run government. But in today’s world the tax mandate has many more facets. These include income redistribution, encouraging favored industries, and discouraging unfavorable behavior.

To make matters worse there are millions and millions of taxpayers who are highly motivated to reduce their tax liabilities. And, as those taxpayers finagle and connive to find ways around the tax code, government responds by propagating new rules, new interpretations of the code, and new taxes in a never-ending chase. In the process, we create ever-more arcane tax codes that do a poor job of achieving any of their mandates. 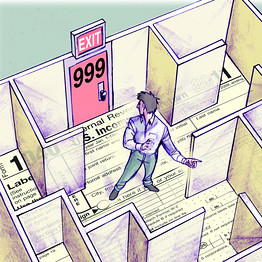 Republican presidential candidate Herman Cain’s now famous “9-9-9” plan is his explicit proposal to right the wrongs of our federal tax code. He proposes a 9% flat-rate personal income tax with no deductions except for donations to charity; a 9% flat-rate tax on net business profits; and a new 9% national tax on retail sales.

Mr. Cain’s 9-9-9 plan was designed to be what economists call “static revenue neutral,” which means that if people didn’t change what they do under his plan, total tax revenues would be the same as they are under our current tax code. I believe his plan would indeed be static revenue neutral, and with the boost it would give to economic growth it would bring in even more revenue than expected.

In the recent past, federal tax revenues from the personal and business income taxes, all payroll taxes, and the capital gains, gift and estate taxes have averaged $2.3 trillion, while gross domestic product has averaged about $14.5 trillion. The total revenue from these taxes as a share of gross domestic product averages around 16%. Sometimes it’s a good deal higher, as in the boom of the late 1990s, and sometimes its lower, as in today’s “Great Recession.” But a number in the 16%-19% range is as good as you’ll get under our current tax code.

By contrast, the three tax bases for Mr. Cain’s 9-9-9 plan add up to about $33 trillion. But the plan exempts from any tax people below the poverty line. Using poverty tables, this exemption reduces each tax base by roughly $2.5 trillion. Thus, Mr. Cain’s 9-9-9 tax base for his business tax is $9.5 trillion, for his income tax $7.7 trillion, and for his sales tax $8.3 trillion. And there you have it! Three federal taxes at 9% that would raise roughly $2.3 trillion and replace the current income tax, corporate tax, payroll tax (employer and employee), capital gains tax and estate tax.

By making the tax codes a lot simpler, we’d allow individuals and businesses to spend a lot less on maintaining tax records; filing taxes; hiring lawyers, accountants and tax-deferral experts; and lobbying Congress. As I wrote on this page earlier this year (“The 30-Cent Tax Premium,” April 18), for every dollar of business and personal income taxes paid, some 30 cents in out-of-pocket expenses also were paid to comply with the tax code. Under 9-9-9, these expenses would plummet without a penny being lost to the U.S. Treasury. It’s a win-win.

This is the type of tax increase I wholeheartedly support. I support collecting more in taxes from people with high incomes who choose to actually pay taxes at lower tax rates than use lawyers and accountants to avoid taxes at higher tax rates. Some tax revenues at low tax rates is a heckuva lot better than no tax revenues at high tax rates.

While the 9-9-9 plan has captured people’s imaginations at this moment, it’s not all that different from California Gov. Jerry Brown’s 13% flat tax when he ran for president in 1992. As you may recall, he came in second behind Bill Clinton in the Democratic Party primary.

In 1986, President Reagan passed a major tax-reform bill that lowered to 28% from 50% the top marginal personal income tax rate. The Tax Reform Act of 1986 also raised the lowest marginal income tax rate to 15% from 11% and closed many loopholes, making for a flatter tax structure. Reagan’s bill passed the Senate in a landslide 97-to-3 vote. Who says a flat tax can’t be a bipartisan proposal?

Still, a number of my fellow economists don’t like the retail sales component of the 9-9-9 plan. They argue that, once in place, the retail rate could be raised to the moon. They are correct, but what they miss is that any tax could be instituted in the future at a higher rate. If I could figure a way to stop future Congresses from ever raising taxes I’d do it every day of the week and twice on Sunday. Until then, let’s not make the perfect the enemy of the good.