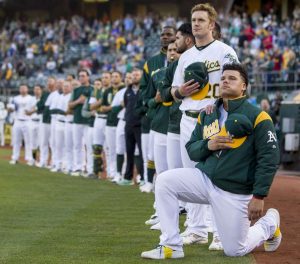 I swear.  These leftists will politicize ANYTHING.

Gone are the days where you had Michael Jordan abstaining from politics because “Republicans buy tennis shoes too.”

Denying those kids a great opportunity like that just to earn some kudos from the faculty lounge in Chapel Hill is nothing short of disgusting.  I’d be willing to bet there are more than a few Trump fans / Republicans buying those season 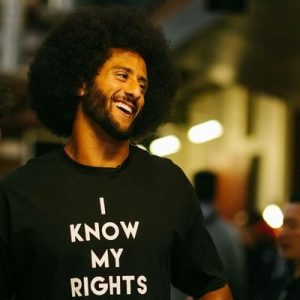 tickets in the Dean Dome and filling the coffers of the Rams Club.  It’s just like those arrogant pricks in Hollywood and the driveby media — spitting in the face AND bitting the hand of the people who feed you.

Let’s not forget the prima donnas who get paid millions a year to play a kid’s game.  We’ve got major league baseball players taking a knee during the national anthem.  We’ve got NBA players calling the president names and boycotting The White House.  Of course, there was an avalanche of anthem protests during today’s NFL games.  (What kind of low-lifes do you have to be to disrespect your own country while on foreign soil?) 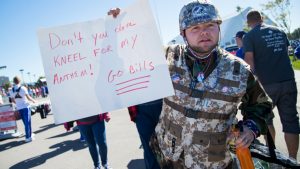 Again, it’s HARD to have sympathy for anyone making millions a year for playing a kid’s game.  There are not a lot of other countries where that could happen.  Nosirree.  Not in Africa.  Not in Central or South America.

THIS is what lowering admission standards in college and steering said “student athletes” toward African-American Studies and other victimhood indoctrination curriculum has earned us.

If these people truly hate this country, they are more than welcome to move to 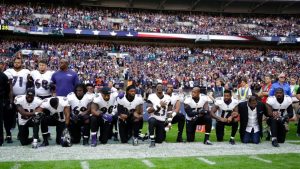 Africa and bask in the warmth of war, famine, poverty and disease.  (Maybe Sally Struthers will come along and shoo the flies away from their faces.)

If they are going to thumb their noses at the greatest country on Earth, I plan to thumb my nose right back at them. ESPN will not darken my TV screen again.  Not one Clifton dime will go toward athletic tickets of any kind — college or pro.  NFL on Fox?

Hollywood is experiencing nightmarish box office numbers after years of spitting in the faces of mainstream America — who they depend on to view their movies and provide an income stream. Insult your customers and you lose business.  That’s capitalism.  That’s life.

Maybe we need to teach that lesson to the imbeciles in the American sports world.

7 thoughts on “I want my sports BACK!”