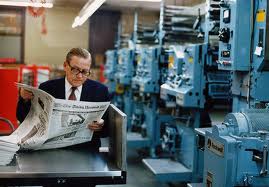 It was with great sadness that I learned of the passing of Hoover Adams on Sunday.   Mr. Adams made a name for himself as the owner, editor and publisher of The Daily Record newspaper in Dunn, North Carolina.

I had the pleasure of working for him in 1996.   Even though he was in the latter part of his career at that time, Mr. Adams still participated in the production of each issue of the paper.  He authored a front-page column for each issue entitled “Little Things” — in which he commented on things he thought were important like the issues of the day, or the successes of the children of friends and neighbors.

I first learned of Mr. Adams during my time working for the late Senator Jesse Helms in Washington.  Mr. Adams and the senator were old friends who kept in touch regularly.

Because of our common association with the senator, Mr. Adams and I built up a great relationship during my time at The Daily Record.  He also had a great appreciation for my “kick butt and take names” style of journalism.  (As readers of this site know, I don’t exactly diplomatically  tiptoe through the tulips when I post items.)

During my time at The Daily Record, I covered the rough-and-tumble congressional race between Bob Etheridge and David Funderburk, and broke the story about The Dunn Police Department putting a professional stripper on the payroll.  Mr. Adams backed me to the hilt when folks hollered to him about what I wrote.

Mr. Adams had established himself as a political kingmaker — a sort of unofficial mayor — for Dunn.   Candidates for Congress, governor, state legislature, and down to school board and city council regularly made pilgrimages to Mr. Adams’s office seeking his blessing.  If ol’ Hoover didn’t like you or what you were pushing, you would have a tough row to hoe in Harnett County.  He and his paper could make life tough for you.

Some younger employees grew frustrated with Mr. Adams’s old-school take on journalism.  His conservative opinions regularly overflowed from the editorial page into the news coverage.  My take was this:  It was HIS paper, he was telling the truth,  and the people appreciated what HIS paper delivered.  It’s capitalism at its best.

Well, Hoover Adams has finally reunited with his old friend Jesse Helms.  I am willing to bet those two tough old birds are shaking things up behind The Pearly Gates.