Yes, the freak show at my alma mater is at it again:

Some students are asking to change a longtime nickname for George Washington University, arguing that “Colonials” is offensive because it is too evocative of colonization and oppression.[…]

Never mind that the people who rallied behind George Washington — the colonials — were some of the most anti-colonial people to ever walk the face of the Earth.  They were seeking to dump England and become an independent nation.

This stuff is all a by-product of leftists pretending that American history BEGAN with the hippies and the 60s. 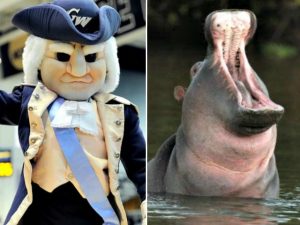 […]As alternatives, they suggested “Hippos.” Or “Riverhorses.”[…]

I wondered about this.  The student store has been marketing T-shirts and sweatshirts for some time now with a hippo caricature instead of George Washington’s profile. (How do you take a college seriously that has a hippo mascot?)

It’s also interesting how the logo has been shortened to “GW” to de-emphasize the full name of our first president.

*Here’s another thing for you leftists to contemplate.  What about all of the FAT people offended by the word ‘hippo’? Hmmm?  Making this move could

trigger all kinds of PTSD regarding those nightmarish junior high and high school years for, um, certain people.*

[…] Student Rachel Yakobashvili created a petition on Change.org that states, “We, as students, faculty, and staff of the George Washington University, believe it is of great exigence that the university changes the official nickname for its affiliates. The use of ‘Colonials,’ no matter how innocent the intention, is received as extremely offensive by not only affiliates of the university, but the nation and world at large. The historically, negatively charged figure of Colonials has too deep a connection to colonization and glorifies the act of systemic oppression.”[…] 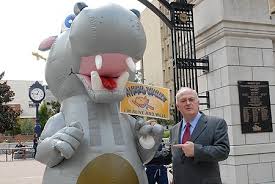 Again, the team name is derived from the folks who took up arms, under the leadership of the school’s namesake, to free themselves from British colonialism.

FYI, the school was founded in 1821 based on the wishes of President Washington — who also was one of the school’s first investors.

[…]She and other students also created a petition on a website for the Student Association, which suggested “Revolutionaries” as another possible nickname. By Thursday afternoon, more than 200 students had added digital signatures. If 500 students sign on, the Student Association president will have to respond to the request. The petitioners have not approached university officials with the issue.[…] 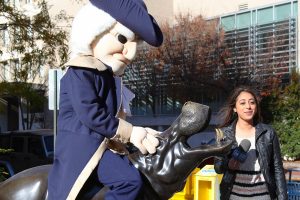 Revolutionaries?  That puts the school more in line with Fidel Castro and Lenin.  The faculty and these skulls-full-of-mush should be OK with that.

[…] Leaders of GW Students for Indigenous and Native American Rights did not immediately respond to a request for comment Thursday.[…]

*THAT is a shame.* (I am willing to bet their membership is larger than The College Republicans.)

[…] The GW Hatchet, the student newspaper, quoted sophomore Andrew Hesbacher as saying, “Colonialist, terrorist, murderer. In a lot of places that’s what colonials mean to people. Why would we continue to call ourselves that?”[…]

THIS is a shame for an entirely different reason.  (*Moron.*)

[…] Names, symbols and statues have stirred controversy on university campuses across the country in recent years, in the midst of cultural debates about history.

When he was GW’s president, Stephen Trachtenberg bought a bronze sculpture of a hippopotamus in an antique store in 1996 and donated it to the school, which he felt needed more traditions. Some students rub its head or put coins in its mouth for good luck.

The Colonials nickname began in 1926, according to a university website. An editorial in the GW Hatchet asked at that time, “What name could be more fitting? This, the school named after George Washington, and having as its colors the Continental Army buff and blue, the colors of Colonial America, should be entitled to bear the name of ‘Colonials’ if any school is so entitled. . . . Let us then, in just regard for our precious heritage, adopt as the name for the warriors wearing the Buff and Blue the term ‘Colonials.’”

Since 1996, the GW Hippo has been an unofficial mascot, with a student at some games in an inflated hippo costume, according to the website about university nicknames.

“As with any school, there are certain things we identify with,” said Peak Sen Chua, the outgoing Student Association president, a public health and political science major from Malaysia. “The mascot is an important part of campus life at GW.”

Caroline Hakes, a freshman who is director of public relations for the GW College Republicans, said her group believes administrators should listen to student opinion and make the decision from there.

“There’s obviously a contingent of students that feel the mascot should be changed, that it’s not representative of modern times,” she said.

Her group hasn’t taken a position, but she said, “I think the reason that people would disagree is that this is a part of our school legacy, our school history. There are people that would argue you can’t change history just because it makes you uncomfortable.”[…]

There you, go.  The CRs are scared of getting beat up.  As bad as this campus has become, I can’t say I blame them.

[…] Lindsay Hamilton, a spokeswoman for the university, said

administrators have not discussed changing the mascot.

In February, Chua said, the Student Association held the first “Hippo Day,” handing out cupcakes and stickers of hippopotamuses. “It was a fun event,” Chua said. “We tried to amplify calling ourselves the hippos rather than the Colonials.”