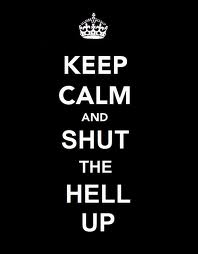 Paula Deen — the cooking show maven who raised money for Obama and had Michelle-O on the air with her — got raked over the coals because she said the notorious “n-word” a couple of decades ago.  The liberal jerk Alec Baldwin has repeatedly used anti-gay profanities.  It cost him his MSNBC show. But who was watching that anyway?

State senator Bob Rucho is getting raked over the coals for committing a double-foul (bashing ObamaCare AND  equating ObamaCare implementation to stuff the Nazis did).  State GOP HQ even jumped into the fray demanding an apology from Rucho.  To the senator’s credit, he told Pope & co. to stuff it.

Former state senator Doug Berger (D) compared 2012 marriage amendment proponents to the Nazis, and the silence from the lefty speech police was deafening.

Now, one of the stars of the wildly popular “Duck Dynasty” reality show is being pummeled for his comments in a GQ interview.  His real mistake was doing an interview with GQ and saying stuff the gays wouldn’t like.  Doing that in the pages of GQ is like going on BET and repeatedly screaming the “n-word.”  In both cases, you are seriously antagonizing the target audience.

Now, it looks like Phil Robertson is going to take a financial and PR hit:

A&E has indefinitely suspended “Duck Dynasty” patriarch Phil Robertson after anti-gay comments he made in the January 2014 issue of GQ magazine.

Robertson, outspoken about his Christian faith, equated homosexuality with bestiality and called the lifestyle a sin.

“We are extremely disappointed to have read Phil Robertson’s comments in GQ, which are based on his own personal beliefs and are not reflected in the series ‘Duck Dynasty’,” A&E said in a statement on Wednesday.

“His personal views in no way reflect those of A&E Networks, who have always been strong supporters and champions of the LGBT community. The network has placed Phil under hiatus from filming indefinitely.”

The Hollywood Reporter said that Robertson will likely appear in the new season, which begins Jan. 15, since production is nearly finished.

In the GQ interview, Robertson goes on record with comments about the sinfulness of gays and black people under Jim Crow.

In the profile, an unedited Robertson sounds off on what’s ailing the country during a trip through the Louisiana backwoods.

He also muses about his own sexual orientation: “It seems like, to me, a vagina—as a man—would be more desirable than a man’s anus. That’s just me. I’m just thinking: There’s more there! She’s got more to offer. I mean, come on, dudes! You know what I’m saying? But hey, sin: It’s not logical, my man. It’s just not logical.”

Well, Robertson walked right into the trap.  It’s what these people were looking for.  Though, I’ll have to say it is interesting that the free speech crowd is so eager to shut somebody down, have them fired, and just plain ruin them if they dare to step off the liberal plantation.  I don’t think MSNBC should have fired Martin Bashir or Alec Baldwin.  I think A&E overreacted here.  As long as you’re not saying any of George Carlin’s “Seven Dirty Words” or communicating a specific threat or slandering someone, what’s the problem?

The late Tim Russert once told me and a few others over breakfast in DC about how he reads stuff from the left AND the right — stuff he agrees with AND disagrees with — because it makes him a better-informed, more well-rounded person.  Instead of shoving GLAAD’s propaganda down viewers’ and readers’ throats 24-7-365, why not give other perspectives on homosexuality a fair shake?

Threatening people — or shouting them down — because they dare to divert from the official party line is the kind of stuff you saw in Hitler’s Germany, The Soviet Union, Mussolini’s Italy, and in modern-day Cuba, North Korea and Iran.  It’s not what we should be seeing and experiencing in The United States.