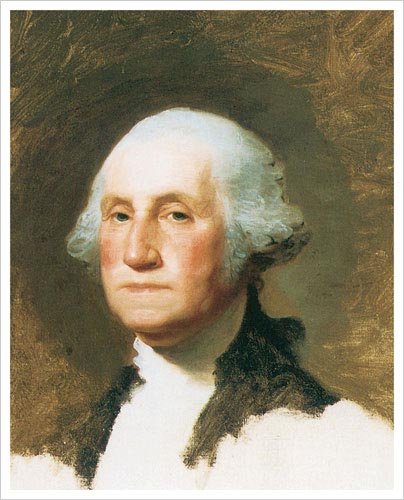 It’s as if I needed ONE MORE reason to ignore all those calls and solicitations from the alumni association.

Apparently, there is  a growing movement at The George Washington University (my alma mater) to distance the school from (1) the athletic team nickname “Colonials” and (2) the nation’s first president himself.

For some time, the selection of T-shirts and sweatshirts and other memorabilia bearing the likeness and / or FULL NAME of the Father of Our Country has been getting smaller and smaller. (Never mind that the school is named for the man.  Never mind that the idea to establish the school  came from the man himself during his time in office.)

You are most likely to find the school referred to as simply “GW” in literature and on school-endorsed clothing and memorabilia.  (Wearing a “GW” hat or sweatshirt here in North Carolina is likely to make people think you are a Gardner-Webb alum. Not that there’s anything wrong with that. )

The athletic team name and mascot has, for ages, been based on the “Colonials” — the British name for General Washington’s soldiers during The American Revolution. The latest generation of students (with some faculty help) is trying to replace the “Colonials” mascot and team name with — no joke — The Hippopotamus.   Athletic wear featuring the cartoon likeness of a hippo has been released.  There is a hippo statue on campus.  There is even a “Hippo” mascot that works the crowd at home basketball games. 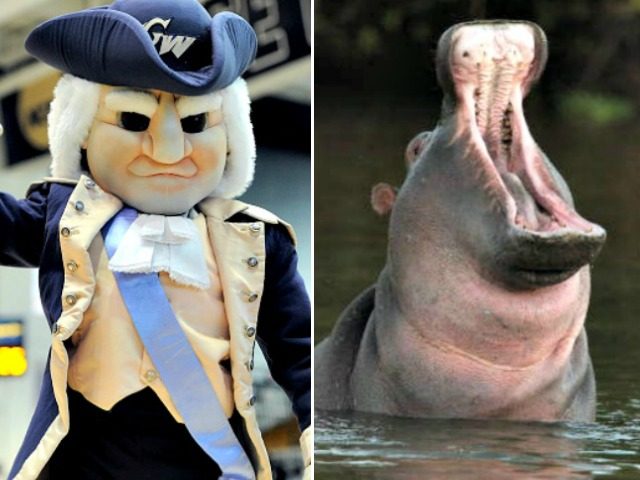 The move to downplay the name “George Washington” stems from the little skulls-full-of-mush on campus seeing the man as little more than an oppressive white person who enslaved blacks.  The “Colonials” nickname — meant to celebrate the men who risked their lives in The Revolution —  is derided as “offensive” and “unwelcoming.”

Here’s the latest on the whole travesty:

Officials have reinstated the hippo statue as a stop on Foggy Bottom campus tours after announcing at a tour guide meeting Wednesday that they would nix the stop moving forward.

Admissions officials informed GW STAR tour guides Thursday that they should continue to include a stop at the statue – located at the corner of 21st and H streets – according to an email obtained by The Hatchet. The reversal follows backlash from students on social media and an executive order issued by Student Association President SJ Matthews defending GW’s unofficial mascot Wednesday after administrators cut the stop.

“As we discussed last night, you should also consider ways to thoroughly showcase campus buildings you enter with your tour groups,” the email read. “As you know, we are constantly evaluating our route and we welcome your input as we try to widen the scope of the current tour.”

Officials told tour guides Wednesday that the Office of the President requested that they remove the campus tour stop at the statue, which led Matthews to issue her order.

Matthews urged students not to lose their “momentum” and continue to hold members of the community accountable. She said that moving forward, students should work to ensure that the University ditches the Colonial nickname, which students have criticized as “offensive” and unwelcoming.

Fifty-four percent of voters in last year’s SA elections endorsed abandoning the moniker, which led Matthews to create a task force in September to address the issue.

“I thank the administration for listening to the students and for taking this quick action,” she said. “Now that the hippo is here to stay, let’s make sure the Colonial moniker goes away.”

A University spokeswoman did not return a request for comment.

One thought on “Erasing Mr. Washington”