It’s truly disgusting to watch the drive-bys — the remnants of the so-called mainstream media — working overtime to whip up racial strife in an era they promised us, in 2008, would be post-racial.  Look what they did to George Zimmerman in Florida.  The community was torn apart.  Zimmerman’s name was dragged through the mud, while Trayvon Martin was portrayed as more innocent than Bambi.  Look what they did in Ferguson.  All kinds of inflammatory half-truths were aired.  The community was torn apart.  The officer’s life was ruined.  Once the system ran its course, we found out the reporting was full-of-it.  Ferguson was left to lick its wounds, while the drive-bys moved on to the site of its n 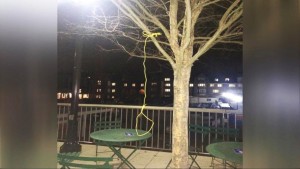 ext mess. (Which, by the way, looks like Charleston, South Carolina.)

We all remember the travesty that was the Duke lacrosse case.  Leftist faculty members, opportunistic leftist politicos, and various and sundry race pimps attempted to lynch the mostly-white Duke lacrosse team with groundless charges of alleged gang rape of a stripper.  The guys on the team were dragged through the mud.  The lacrosse coach was run out of town.  Duke University’s reputation took a hit.  The case turned out to be a farce.  The team was acquitted.  But the damage was already done.  The drive-bys moved on in search of their next victims.

Well, the drive-by race pimps made their way back to Duke.  In the early morning hours of April 1, a photo of something reported to be a noose on a tree at the Duke campus, showed up in the Twitter account of a left-wing student / campus activist.  I saw a screenshot of that Twitter post, which included several comments from drive-by producers — salivating over the thought of getting that photo. *Screw any investigating.  We gotta get that inflammatory photo into circulation!*

Duke administrators bowed down before the race pimps and begged forgiveness for the photo — before any investigation had even gained traction.  Rallies popped up across campus.  Administrators and faculty members called for students to be properly programmed in line with the race pimp platform.

An awful lot of screenshots from Twitter featuring posts from people who may or may not have been Duke students comprised a shamefully high percentage of the drive-by reporting on this matter.

By April 3, administrators at Duke announced that someone had confessed about the noose.  And they were off campus.  We were told an investigation was ongoing.  Here we are TEN DAYS later, and the silence from the drive-bys and the leftist lynch mob is deafening.

Interesting.  The drivebys have been super-eager to publicly crucify people — white cops, white civilians —  they see as victimizing black folks. (Ferguson, the fraternities at NC State and Oklahoma, George Zimmerman, Staten Island, Charleston.)   Just imagine what they could do with a story line featuring a rich white Duke student hanging a noose to scare black students.

But we’re hearing NOTHING.  Why?  Has it been discovered that the noose was a hoax by leftist race pimps?  (It wouldn’t be the first time.)  After all, the fact that it shows up just days after a nameless black student was reportedly taunted by a nameless white student was interesting timing.

The drivebys did a hell of a job of whipping up a hysterical frenzy on the Duke campus.  You would think they’d owe their readers / viewers a conclusion to the storyline they’ve been reporting.  (BUT, if it’s looking like it doesn’t exactly jibe with the left-wing race pimp party line … )

We’re owed an explanation for this.  If it was a white person trying to intimidate black people, he or she needs to be publicly shamed.  If it was a lefty trying to do a little astro-turfing to whip up folks against whitey,  those commie-red pointy heads need to roll too.

It’s too bad we can’t sue for media malpractice.