The practitioners of my former occupation never cease to amaze (or appall) me.  They regularly take the sacred rights and privileges granted to them in The First Amendment and poop all over them.

In my day, I covered quite a few stories that had statewide or national interest.  I’ve been part of those five-deep media scrums around the police spokesman or defense attorney.

There are SOME rules I operated by that I thought were just plain freakin’ common sense.  But — judging from drive by behavior on display every day — they apparently are not.

Stupid Questions.  A lot of these get fired off at press briefings from folks wanting to sound knowledgeable (or wanting to look like they are actually working) when in reality they have no idea about (1) what is happening, or (2) the overall subject matter.  Sometimes they even get fired off for the purpose of furthering a political agenda.  Let’s take the San Bernadino shootings.  Here are three examples of actual questions fired off to a police spokesman ON AIR:

#1 was aimed at hopefully creating another storyline to bash the pro-life movement.  They had so much gosh-darned fun doing it recently in Colorado Springs.

As far as #2 or #3 go — what difference does it make ?????  A whole bunch of people are dead and injured in a state with some of the strictest gun control laws in America.  (While focusing on those details, they downplayed the much more important Islamic State-terrorism connection.)

The ulterior motive — I suspect — was to set up a narrative for Diane Feinstein, Chuck Schumer and the rest of the gun-control howler monkeys on Capitol Hill.

Screwing up the operation.  I’ve seen quite a few imbeciles in the drive-by community bumble and screw up — or nearly screw up or try to screw up — military or law enforcement operations.   I’ve covered both.  I could never live with myself if any of my professional actions caused a military or law enforcement op to fail or a soldier or cop to be injured or killed in the line of duty. 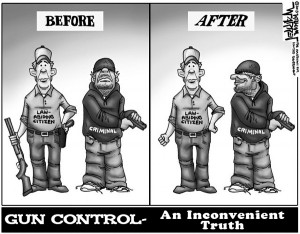 During the first Gulf War, SNL had a GREAT skit making fun of the drive-bys’ idiocy and total disregard for national security.

During the San Bernadino AND Colorado Springs coverage, I saw drive-bys airing live footage documenting the counts and locations of law enforcement personnel.  A suspect — or accomplice — watching on TV at the time — had access to some great intelligence.

What really took the cake was the stampede into the suspects’ apartment.  Was anybody bothered about the possibility of damaging the investigation?  Granted, the couple was dead. But there could have been details about future, planned, yet-to-be-undertaken terrorist acts in that apartment.  Was the footage WORTH that possibility?