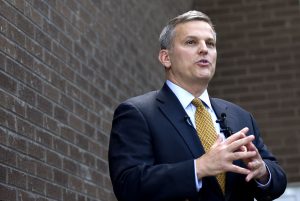 The North Carolina Department of Justice’s crime lab is screwing over crime victims left and right.  Local governments are having to outsource their crime lab work to actually prosecute criminals.  Rookie attorney general  (and social justice warrior / snowflake) Josh Stein has been crying to anyone who will listen about how “draconian” budget cuts are decimating his department.

So, what is he focusing his attention on?  Let’s see:

Stein joined other attorneys general from around the country to sue U.S. Education Secretary Betsy DeVos, who froze rules last month that would have forgiven the federal loan debt of students cheated by predatory for-profit colleges.

The attorneys general, all Democrats, from 18 states and the District of Columbia accuse the Trump administration’s education secretary of breaking federal law and giving the questionable schools free rein by rescinding the Borrower Defense rule that was to go into effect on the first of this month.[…]

Okay.  A loan is typically taken out with the understanding that it will be PAID BACK.   Those federal loans are tax dollars.  (And how many trillions in debt does this country now have?  Can we really afford to blow off recovering ANY liabilities?)

It’s arguable that most college students get taken for a ride by colleges.  You’re not getting your money’s worth.  And there are an awful lot of degrees being passed out that are actually pretty worthless toward the effort to secure a job and a profitable, successful future.

“The delayed rules are deeply troubling,” Stein said in a statement. “Students who borrow money for their education are taking a risk to improve their lives – and they must be protected from those who take advantage of vulnerable student borrowers. Delaying these rules that protect students is irresponsible and reckless.”[…]

Risk.  Bingo.  THAT is at the heart of capitalism.  Socialism, fascism, communism and all that other icky stuff has,

at its heart, the “protection” of “the vulnerable” in society.

You could actually argue that it’s more “irresponsible and reckless” to (1) “loan” money to people who likely can’t pay it back, or (2) “loan” money and then blow off recovering that debt.

It’s interesting that Stein and his fellow Democrat AGs behind this suit aren’t targeting colleges for gouging their students.  (That will NEVER happen.  The payrolls of said campuses are packed with loyal Democrat voters and donors.)

Stein is being hailed by in-state liberals as their best hope for the future.

I hear DC Democrats are eyeing him for a future US Senate run.  A move like this definitely racks up brownie points that would certainly aid a run for higher office. Who wouldn’t love someone for removing a huge debt from their shoulders?

Except, moves like forgiving all that debt just shove our nation deeper into a fiscal hole full of red ink — threatening the future of our nation and the livelihoods of our children and grandchildren.