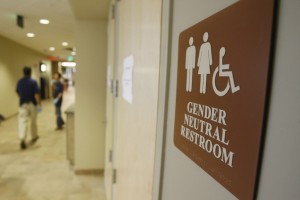 Just when I  thought I had seen and heard it all.  I never imagined a day would come when our elected officials would be seriously considering legislation allowing one to decide whether he or she is male or female.   One of our major cities wants to mandate that your gender is not determined by nature, but by your personal preference —how you feel today.

Charlotte City Council is preparing to vote on a sweeping anti-discrimination ordinance:

Allowing transgender people to use the bathroom of their choice in restaurants, stores and other places of public accommodation divided the Charlotte City Council on Monday night.

The city is considering expanding its existing nondiscrimination ordinance to include protections for people based on their sexual orientation, sexual identity or sexual expression, and familial or marital status.

Much of the ordinance – such as adding gay and lesbian people to a group of protected classes – wasn’t controversial. But the bathroom question provoked a sharp exchange between council members.

At-large member Michael Barnes, a Democrat, said he was concerned about sending his children into public restrooms.

“If I send one of my daughters into a public bathroom, and I see (a man) going into that bathroom, I am going to have some concern,” Barnes said.

His comment drew a rebuke from Al Austin, a fellow Democrat. Austin said it was deplorable that the city and nation was still debating civil rights, 50 years after the federal Civil Rights Act was passed.

“Mr. Barnes, if you want to know about people being discriminated against because they are LGBT, it’s a bad feeling going into a restaurant and being asked to turn around,” Austin said.[…]

Seriously ???? THIS is the most pressing issue facing Queen City leaders?  They’re going to try and override laws of nature?  (Of course, passing this ordinance could give a new meaning to the nickname “Queen City.”)

The Billy Graham Evangelical Association has even weighed in:

If a city ordinance is passed at the March 2 Charlotte City Council meeting, any biological male will be permitted to use a women’s public restroom as the new policy would rank “sexual orientation” and “gender identity” higher than biological sex.

Restrooms in both public and private business in Charlotte, North Carolina, would be required to adhere to the proposed transgender ordinance, which applies to restaurants, stores, bars, gas stations, parks, zoos, libraries, bowling alleys, theaters and many other public places.

Men who simply identify themselves as women would be allowed to use any public women’s bathroom-and vice versa-without any repercussions.

“I cannot see why City Council would even consider this,” Franklin Graham, president of the Billy Graham Evangelistic Association said. “It is not only ridiculous, it’s unsafe.

“Common sense tells us that this would open the door, literally, to all sorts of serious concerns including giving sexual predators access to children. It violates every sense of privacy and decency for people of both sexes, adults and children.”[…]

Franklin Graham’s outspokenness on the proposed Muslim call to prayer at Duke made a huge difference in deep-sixing that plan.

It’s fascinating to see the folks on the left, alleged protectors of personal freedom, going all-out authoritarian on Charlotte’s business community — telling them who they BETTER do business with.  If this were merely about letting people do their own thing, while minding their own business, without being brutalized, that would be one thing.

This is more about making a fundamental, permanent change to our culture and way of life.  It’s a full-frontal assault on deeply-held religious doctrine that goes back thousands of years.

It’s about forcing parents to have way-too-early, incredibly-awkward conversations with their preschoolers about the drag queens in the restroom. It’s about establishing the supremacy of a certain political agenda, even if you have to rewrite the laws of nature, shred people’s freedoms of association and religion, trample parents’ rights to raise their children as they see fit, and deploy the government’s iron fist to meddle in private businesses’s in-house strategies and decisions.

Today it’s bathrooms and restaurants and stores and marriage.  Next, it will be about threatening your church if it fails to ” see the light” regarding the gay political agenda.