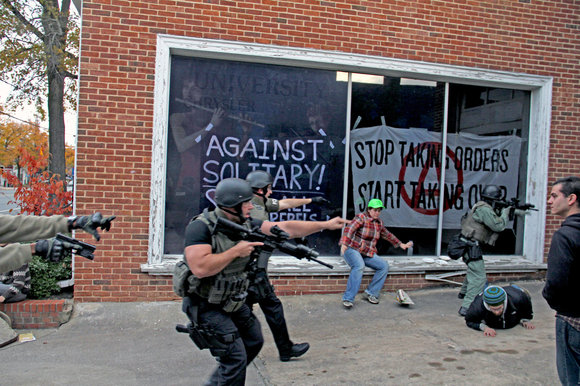 It just brings tears of joy to my eyes when cops manhandle lefties.  I’ll have to admit that it was a shock to see this happening in our state’s Loony Left HQ:

A police tactical team of at least 20 police officers arrested eight demonstrators Sunday afternoon and charged them with breaking and entering for occupying a vacant car dealership on Franklin Street.

Officers brandishing handguns and semi-automatic rifles rushed the building about 4:30 p.m. They pointed weapons at those standing outside and ordered them to put their faces on the ground. They surrounded the building and cleared out those inside.

About a dozen people, including a News & Observer reporter covering the demonstration, were forced to the ground and handcuffed.

Those who had been outside the building at the time of the arrests – including N&O staffer Katelyn Ferral – were detained and then let go after their pictures were taken.

Eight people inside the building were cuffed and put on a Chapel Hill Transit bus to be taken to the police station and charged with misdemeanor breaking and entering.

“Along with facilitating citizens’ ability to exercise their constitutional rights, it is also a critical responsibility of all levels of government in a free society to respond when rights of others are being impinged upon,” Chapel Hill Mayor Mark Kleinschmidt said in a statement Sunday night.

“This weekend a group of protesters broke into and entered a privately owned building in downtown Chapel Hill. … The Town has an obligation to the property owners, and the Town will enforce those rights.”

In a statement Sunday night, police said they had monitored the building since Saturday night when they learned attendees of an anarchist book fair held this weekend aligned with Occupy Chapel Hill and that about 70 people entered the former car dealership.

“Officers also learned that strategies used by anarchists in other communities included barricading themselves in buildings, placing traps in buildings, and otherwise destroying property,” said the statement from Lt. Kevin Gunter. “The group in the … building used large banners to obscure the windows to the business and strategically placed members on the roof as look-outs.”

Police waited until the crowd reached “a manageable size” before moving in Sunday, the statement said.

A crowd of between 50 and 75 people gathered across the street, watching and taking pictures as the bus carrying the protesters pulled away.

A ‘messed up thing’

The group identified itself as “anti-capitalist occupiers” and moved into the former University Chrysler and Yates Motor Co. building at 419 W. Franklin St. on Saturday night, the police statement said.

The brick and cinderblock building with large windows fronting the sidewalk is owned by out-of-town businessman Joe Riddle and has stood empty for many years.

One demonstrator said they acted in the tradition of working-class squatters’ movements around the world that some say inspired the Occupy Wall Street movement and its offshoots across the United States.

The group printed a flier that proposed a possible new use for the space that would include a free clinic, kitchen, child care, library and dormitories, among other uses.

The flier acknowledged they broke the law by entering the building.

“Make no mistake: this occupation is illegal,” it said, “as are most of the other occupations taking place around the U.S., as were many of the other acts of defiance that won the little freedom and equality we appreciate today.”

Hannah Shaw, 24, of Chapel Hill was handcuffed – a gun pointed at her head – as she showed her friend a picture of her kitten, she said. The police action will only make the movement stronger, she said.

“This building has been empty for years when people are sleeping outside. That’s a really messed up thing,” she said. “(The police) are making more enemies than friends.”

“This place has been a box of air for over a decade,” said demonstrator Amanda Ashley, who ran for mayor of Carrboro two years ago. “That’s what capitalism does.

“We are not taking ‘no’ anymore,” she continued. “Literally, this (building) is a piece of trash. It’s a big soda bottle. We’re recycling it. How can that be wrong?”

Ashley also has participated in the Occupy Chapel Hill group camped outside the post office on a site the town calls Peace and Justice Plaza since Oct. 15. About a dozen tents were on the plaza this weekend.

Police have said they do not plan to intervene there as long as demonstrators allow access to the building.

Demonstrator Neal Richards said the protesters modeled themselves, in part, on “los indignados,” working-class people of Spain who feel ignored by the government and major political parties and whose rallies inspired the Occupy Wall Street movement in the United States.

In Chapel Hill, Richards said, “We consider it an affront to sensibility and decency to have a building collecting dust when it could be used for the community.”

“Look around,” he continued. “People are not making money for rent. People don’t have jobs.”

Demonstrators, at least before Sunday’s arrests, saw the Chrysler space as a potential place to keep Occupy Chapel Hill and like-minded people going as the weather gets colder. “This could certainly provide a permanent infrastructure for the movement,”Richards said.

On Sunday afternoon, eight palettes lay on the concrete floor, some with bedding material. Demonstrators swept the inside and set up chairs in the former showroom for an afternoon discussion onprison system injustice.

It wasn’t clear how they entered the building. A wooden board held the rear garage door open.

“The first 48 hours will be extremely touch and go, but with a little luck, and a lot of public support, we aim to hold it in perpetuity,” the group said in a statement. “Regardless, we hope that this occupation can inspire others around the country. Strikes like the one in Oakland present one way forward; long term building occupations may present another.”

Kleinschmidt agreed the “Occupy movement carries an important message.” However, he said, “I suspect it will be heard more clearly from Peace and Justice Plaza than from the Orange County jail.”

Okay, Mr. Mayor, I realize these people are your constituents. But if you think what they are doing is so important, why not offer up your front yard as a base camp for the local “movement”?  Better yet, sympathetic N&O reporter, why not offer up your workspace in the newsroom or your apartment?
I hope my friends at the Southern Pines Police Department took notes on this as they prep for ‘Occupy Broad Street’ on December 10.  THIS is how you handle dirty, law-breaking leftists.
Private property IS private property REGARDLESS of how long it has been sitting vacant.