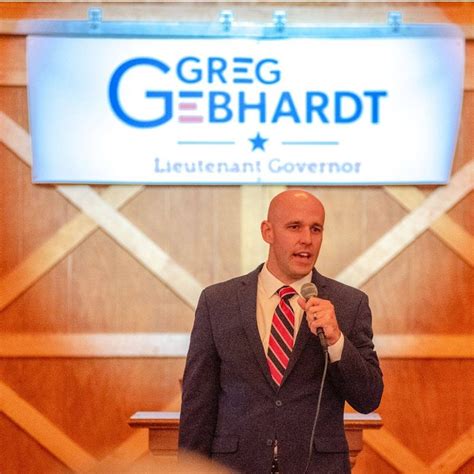 We’ve got a crowd in both parties running for the soon-to-be-vacant lieutenant governor seat.  Looking at the list of Republicans —  I can honestly say there are definitely TWO right off the bat worth saying HELL NO to voting for:   Mark Johnson and Renee Ellmers.

Though,  I might be able to add one more lucky contestant to that ,um, distinguished list:  Gregory Michael Gebhardt.  Gebhardt is smooth and polished.   He was, in all likelihood,  the featured special at The Candidate Store.™

Gebhardt has long been a henchman / groupie for state Rep.  David Lewis (R-Harnett) —  a guy with more clouds around him than a spooked skunk.    Gebhardt has served Lewis as a “policy adviser” and as a “campaign director”.

Gebhardt ran unsuccessfully against state Rep.  Mark Brody for one of the state’s seats on The Republican National  Committee.

Since that unsuccessful run,  Gebhardt has been flitting around Raleigh as an employee of Cypress Creek Renewables.   (That’s right —  as a solar goon. )  According to his LinkedIn profile,  he held the title of Director, Strategic Development and External Affairs.  It’s curious.  His LinkedIn profile shows no previous experience in the renewable energy field before landing that prestigious sounding job title. (But he did have that experience working in the General Assembly.)

Some critics on social media have questioned Gebhardt about his work with Cypress Creek.  Here’s what the candidate had to say: 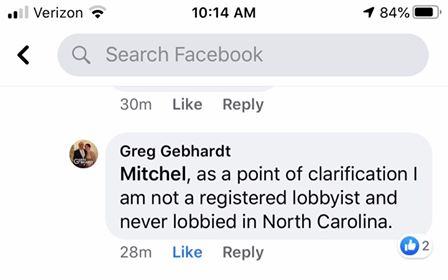 Seriously?  Let’s examine the record.  The North Carolina Secretary of State says  Gebhardt has an active lobbyist registration and was one of a gaggle of lobbyists registered by Cypress Creek Renewables to work in North Carolina.

Now,  let’s drop down south of the border.  The South Carolina Secretary of State’s office says Gebhardt is an active registered lobbyist for Cypress Creek Renewables and last filed a lobbyist disclosure form in June 2019.

Gebhardt’s LinkedIn profile says he left Cypress Creek in  July 2019 to become a “Business Development Consultant.” (I bet it’s just a coincidence that he launched his lieutenant governor campaign right about that time, as well.  Shades of Richard Hudson’s “Cabarrus Marketing”?)

Early voting starts tomorrow for this and many other races.