prosecute and deport 80 and 90 year old American citizens for alleged collaboration with the Nazis in World War II.    Here in 21st century America, we have a prominent, wealthy naturalized American citizen who has admitted helping the Nazis confiscate property belonging to Hungarian Jews.  (In fact, he described the year he lived under Nazi occupation as “probably the happiest year of my life.”)

Here The Jerusalem Post suggests Soros is still trying to make life miserable for Jews.   Here is a great piece on how Soros’s market destabilization efforts have been the catalyst for the flood of refugees killing Europe’s economy.

The government has been so eager to go after 90 year old retired immigrants for crimes they may or may not have committed 60 or 70 years earlier.  But they seem reluctant to touch one George Soros, who — amidst his mischief making — manages to fill a lot of politician pockets.

[…] Steve Kroft: My understanding is that you went out with this protector of yours who swore that you were his adopted godson. Went out, in fact, and helped in the confiscation of property from the Jews.

George Soros: No, not at all. Not at all. Maybe as a child you don’t–you don’t see the connection. But it created no problem at all.

Steve Kroft: No feeling of guilt?

Steve Kroft: For example that, ‘I’m Jewish and here I am, watching these people go. I could just as easily be there. I should be there.’ None of that?

George Soros: Well, of course I could be on the other side or I could be the one from whom the thing is being taken away. But there was no sense that I shouldn’t be there, because that was–well, actually, in a funny way, it’s just like in markets–that if I weren’t there–of course, I wasn’t doing it, but somebody else would–would–would be taking it away anyhow. And it was the–whether I was there or not, I was only a spectator, the property was being taken away. So the–I had no role in taking away that property. So I had no sense of guilt.”[…]

Get that?  “No sense of guilt.”  This guy has bankrolled The Round Rev and has likely had a hand in inciting the rioting in Charlotte and Durham.  One of the main goals of terrorism is to incite fear and create economic 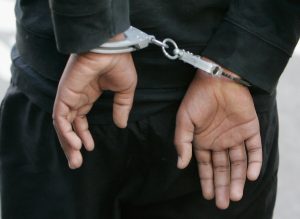 instability.  THAT is what George Soros has done around the world and HERE AT HOME.

So many other old men have been ripped from their homes and families, prosecuted and deported to face the music for their actions in World War II.  None of those guys had a wad of cash in their pockets as big as George Soros’s.

Pass around enough cash to enough crooked politicians, and you’re UNTOUCHABLE.  This guy needs to answer for what he did in World War II AND for what he’s been doing around the world for the last several decades.

It’s way past time to send this guy packing — to SHOW HIM THE DOOR.

3 thoughts on “Build the Wall AND Deport George Soros”