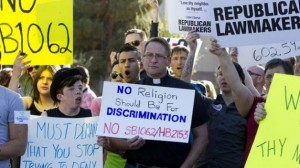 Social conservatives and libertarians tend to find themselves at odds on some things.  Some social conservatives like to see government provide protection for traditional values.  Libertarian-leaning folks believe the government needs to butt out of personal lives.  But this latest push by the gay political movement should give pause to both camps and give them some common ground.

Arizona’s legislature has passed a law allowing business people to refuse service to potential customers based on religious beliefs.  In other words, you would be protected from a civil rights / human relations complaint or suit for refusing to host a gay wedding if your religious beliefs state that homosexuality is a sin.

I heard a spokesman for one of the national gay groups explain today that “people have a right to be served and not be discriminated against.”  A “right”?  Really?  I checked The Bill of Rights thoroughly and could not find a right to a good or service from a private business. (It must be in there with that oft-cited “right to choose” abortion.)

I also came across an item where some civil rights groups are pushing the NFL to institute a 15 yard penalty for any player who uses the nasty n-word.  One civil rights leader was quoted saying: “If these players won’t respect each other, we’re going to have to pass some rules to make them.”

Wow. How do you make rules that effectively force people to get along?  Is that the government’s job to make sure people don’t hurt other people’s feelings?

There have been high-profile cases where businesses refused to provide cakes or flowers for same-sex weddings. The business owners suggested that their decisions were based on religious opposition to same-sex marriage.  These business owners got hit with government complaints and investigations as a result.

Republicans like John McCain and Mitt Romney are publicly urging a veto of the Arizona legislation. The NFL and Apple and the hotel industry are also chiming in.  Network news is all over the story.  Never mind terrorism or the economy or the energy crisis.  Gay stuff is *important.*

Situations like this can present a quandary for folks who appreciate limits on government.  On one hand, The Constitution specifically protects freedom of religion.  On the other hand, government passing laws like this can seem like overreach to libertarians.

This is not comparable to the civil rights movement of the 1960s.  This is actually all part of an effort to stomp out the last vestiges of traditional values.

It’s now NO BIG DEAL anymore to have a baby outside of wedlock.  (I remember a story about an NFL player who has so many kids he can’t remember all of their names. ) It’s pretty common to find people co-habitating for decades and raising their children together.

For generations — for centuries — marriage has been clearly defined as a religious ceremony between a man and a woman.  The left is trying its best to twist that institution out of context — taking it out of the church, inserting the government into it, and watering down the whole different-gender requirement.

This is only the beginning.  Your church gets approached to host a gay wedding or wedding reception.  If you refuse, the church can find itself on the receiving end of litigation pushed by government agencies and deep-pocketed PACs.

Social conservatives and constitutionalists ought to be able to see some common ground here.  Lefties claim all kinds of “rights” to choose and get served, but we have to fight tooth and nail to partake in activities specifically protected by The First and Second Amendments?

Good capitalists can look at the decision to refuse gay business as fool-hardy.  Black people, gay people, and straight people all pay with green money.  But if you try to stand by the principles of your religious faith – and the only consequence is you losing a sale — the government and the community should butt out. There are all kinds of florists and bakers to choose from.

The constitutionalist and libertarian sector should be there for social conservatives who want to practice their beliefs and do no more harm than hurting some lefties’ feelings.

The uproar in Arizona has no basis in our Founding documents.  It’s about twisting the principles in those documents to fit a radical leftist agenda.  You could stand by and sniff derisively at those “Bible-thumpers.”  But what will you do when they move beyond this and start altering other freedoms and constitutional protections to fit their agenda?

The battle in Arizona is an important one for limited government types and the religious right.  Allowing the left a win there could set an ominous precedent for the future of our country and its founding principles.