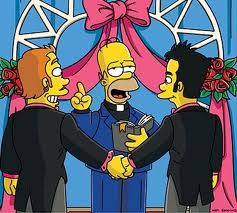 The economy MUST be fixed.  The nimrods in the mainstream media are going on and on about the oral arguments on gay marriage at The U.S. Supreme Court — as though the world’s survival hangs in the balance.

Let’s see.  Yep. We’ve still got record unemployment.  Yep, we’ve still got $17 trillion — and climbing — in federal debt.  Yep, growth in part-time and temporary employment is far out-pacing full-time, permanent employment. Yep, we’ve still got one of the highest corporate tax burdens among the industrialized nations — second only to Japan.  Yep.  ObamaCare is set to raise individual health insurance premiums by an average of 6o percent.  Yet our national leaders and mainstream media are captivated with the concept of whether Adam and Steve get to tie the knot.

The EU was forcing the nation of Cyprus to seize 10 percent of all bank deposits to pay off a bank bailout.  The people protested, and the government balked.  Well, Cyprus has gone ahead and agreed to seize FORTY PERCENT of the balances of all bank deposits in the country.   But this can’t happen here, RIGHT?  (Um, right ?????)

Anyone who receives government benefits or  a government paycheck of any kind has to receive it via direct deposit.  If you read the fine print when you sign up for that, you’ll see that you’re signing over permission for the government to go into your account and make “adjustments” as it sees fit.

Obama seized GM and told the corporation’s bondholders to basically stuff it.

Like I said, we’ve got $17 trillion in debt.  A lot of that is owed to foreign entities — just like the deal with Cyprus.  What happens if some of our creditors call in their chips — wanting to get paid?  It CAN happen here.  (Banks in Spain and France are being issued warnings now.)

John Roberts saw a right to ObamaCare in The Constitution.  Here’s betting that he’ll find one for gay marriage in our Founding Documents.

(Erick Erickson at RedState has an interesting piece on how granting this new “freedom” to gays will likely open the door to an attack on religious freedom.    If gay marriage gains legal standing with the Supreme Court, can the tax-exempt status of churches be threatened if they refuse to host gay weddings?  )

So,  Adam and Steve may get the “right” to tie the knot, and our media and politicians will jabber on about it.  Meanwhile, our economy will continue to slide backward.  Our politicians will continue to borrow, tax and spend our grandchildren’s future away.  You still won’t be able to get a job or afford gas or taxes.   But Adam and Steve will be able to get “married.”  *Hallelujah.*