I’d like to share a column from the student newspaper at my alma mater. A fellow member of the ever so small conservative alumni

contingent forwarded this to me:

This past February, my family came to D.C. to visit me. We sat in the bar of their hotel and caught up, talked about my classes and what I did for the Superbowl. And then we talked about Beyoncé.

As our conversation about the Superbowl halftime performance progressed, I realized that I disagreed with my family members about some key things. But more importantly, I realized that two years ago when I was in high school, I would have agreed with them completely.[…]

Translation:  ”Beyonce is, like, soooooo cool and all my mom and dad want to moan and bitch about is, like, respecting the police and all. I mean, Lady B has a point about cops harassing  black people.”

And this messy process of forming an opinion can be exacerbated in college. The “college experience” is essentially a test tube of young adults from all differ

ent walks of life coming into contact with each other while they are still figuring out who they are.

After the dust settles around meeting your roommate, saying goodbye to your family and attending your first classes and student organization meetings, you will realize what I did at the beginning of my freshman year: You have the chance to be whoever you want to be here.

For some students, including me, becoming who you want to be begins with identifying your own beliefs and separating them from your family’s.[…]

Really?  *Just chuck everything mom and dad taught you for the last 18 years and dash into the warm, loving embrace of Marxist faculty and the Progressive Students Alliance?* MORE:

[…] That can be harder than it sounds. Spending a large portion of your life thinking one way about an issue can make changing your beliefs feel impossible.

We’re supposed to evolve as we get older. If coming to college and taking a whole range of courses doesn’t make you question anything you’ve believed in your life, then you probably aren’t taking advantage of what being a college student is. Question yourself, and question why you believe things. Your opinion might not actually change, but at least you will have taken the time to consider other points of view.

If you’re like me and grew up in a somewhat small, suburban town, then you probably understand what it’s like to grow up where people seem like carbon copies of one another. Kids tend to grow up having similar, if not the same, opinions as their parents. While I love where I grew up for the most part, I wasn’t surrounded by diverse opinions and people. When I came to GW, I was ready to expose myself to different opinions from students from different backgrounds.

Ah, there we go.   Diverse.  The proletariat controlling college campuses have so distorted that word. Diverse, to them, means devout allegiance to the very opposite of white, heterosexual, judeo-Christian, male, conservative, Republican, military, and patriotic.  Mind you, we’re talking in this case about a campus, named after the father of our country, that gave an affiliate of the Communist Youth League THE SAME LEGAL STANDING on campus as the College Republicans and the College Democrats.  (I’ll always cherish the, um, *tolerance* shown by lefties as they rioted and harassed our speakers as they departed our on-campus College Republican events.)

And then I actually started hearing what other students said. When you come to a place like GW and have a big mouth, you are going to be confronted with other opinionated people, but with opposite viewpoints. Often I found myself getting extremely defensive about where I grew up, my political affiliation and what I wanted to do after college. Looking back, I should have handled things differently.

When you’re confronted with a belief that is different than yours, try to not only defend your own stance. Listen to what others have to say, and see their side of an issue. You might notice your own opinions beginning to evolve. Being inundated with all different types of people allows you to become more educated on the complexities of every position.

Soooo — the good lefties browbeat this girl for not being more like them.  NOT very diverse of them AT ALL.   MORE: 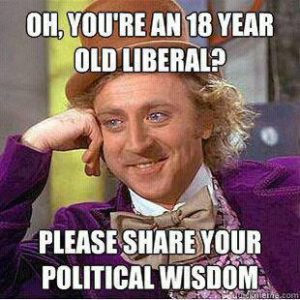 The affect heuristic – the “subconscious process of taking information and processing it through our feelings and instincts and life circumstances and experiences” – hinders us from evolving our beliefs. Our emotions can make it difficult to have constructive debates, so we find ourselves just affirming what we believe by telling someone else that they’re wrong. But that’s what we should actively try to avoid in college.

The moment you are confronted with what you once believed and what you now believe is when you realize that changing your mind is a messy process. Slowly, you might see yourself staying quiet on some issues that used to rile you up. Then you might realize the side of the argument you used to defend is now the argument you’re poking holes in.

I didn’t realize that my opinions had begun to change until I came home for winter break during my sophomore year. I realized that I agreed less and less with some of my family members’ opinions. It was unsettling to feel like the only different opinion in a household and to feel like my family judged me for changing my mind.

Maybe you’ll adjust your beliefs as you go, like I did. And hopefully you can do it without yelling at your family members over Beyoncé, but maybe you should – it was pretty enjoyable.

Yelling at your family about Beyonce.  *Um, yeah.*  That tuition money sure was well-spent.