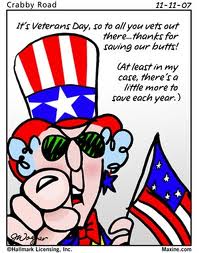 On Veteran’s Day, we need to stop and think about what this day off is truly about.  It’s about paying respects to those who put on a military uniform and made the ultimate sacrifice to defend freedom. It’s about saying thanks to those who are looking a little greyer than they did when they first put on a uniform  many years ago and went off to war.

Veteran’s Day is about reaching out and saying thanks to those who currently go to work in a military uniform during these turbulent times. They’re certainly not doing it for the money.  The job forces them to spend long periods away from loved ones, and to frequently move their families from town to town, state to state, and country to country. Every time duty calls, they — and their loved ones — know that it could be the last time they walk through the door.  During times of conflict,  their loved ones live with the fear of official visitors knocking on the front door with bad news.

You see car-bomb explosions and mass murder in our newscasts occurring all over the world.  Our folks in uniform work hard every day to ensure that we don’t have to live with nightmares like that on our soil.

To all of these idiots in the streets railing against our War on Terror:  Our folks in uniform — who you decry as murderers — are protecting your right to express your opinions publicly.  Try taking to the streets in Syria, Iran, Cuba, China, Venezuela, or North Korea and protesting against the government and the military.

Washington politicians look at our military as some sort of social laboratory.  Turn military service into a way to earn money for college.  Women in combat. Gays in the military. Use Marines to deliver baby formula, play with children, and form women’s rights groups in Afghanistan.  Restrain our troops with ridiculous rules of engagement that force them to call in for permission to shoot back at hostiles.  Throw a small force of lightly-armed soldiers into a hellhole like Somalia — just to show the media and your voters that you “care.”

Our folks in uniform are not pawns in a chess game.  They are PEOPLE, with families and loved ones, who are well-trained in the art of killing people, blowing up stuff and capturing territory.  When the politicos call them to duty, these folks snap to attention and do their duty — regardless of the circumstances.  They don’t file HR or union grievances or call in sick.  The last time that politicians sent our troops into battle — and got out of the way to let them do their job — was World War II.  THAT turned out well.  Our political leaders need to show our troops more respect by taking off the leash and letting them do what they do best when it’s needed.

In my opinion, EVERY DAY should be Veteran’s Day.  When you pray, throw in a few words for our folks in uniform and their families.  When you encounter military personnel out in public, stop them, offer a handshake, and say “Thanks.” It’s the least we can do for folks who we owe more than we can ever possibly repay.

One thought on “Thank You.”