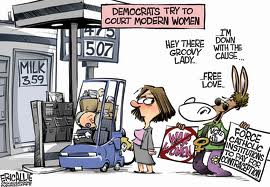 First off — I am not part of the Mitt Romney fan club.  But it was extremely slimy for that Hillary Rosen idiot at the DNC to step out and blast Mrs. Romney for “never having worked a day in her life.”

The Democrat Party claims to be THE defender of women making life choices that are the best for them.  Let’s look at the record.

Michelle Obama and Hillary Clinton — the record clearly shows — got EVERY ONE OF THEIR JOBS because of who they were married to.  Case closed.  Sarah Palin has gotten her hands dirty for years, while also running a family AND a town AND a state.  But the folks at the DNC have a problem with her.  Her party registration (and mindset) are wrong, wrong, wrong.

The Democrat rules for women appear to be this:  (1) It’s OK to pick up jobs –because of who your husband is — if you and he vote the “correct” way, and (2) It’s only good that you work hard for a living — if you vote the “correct way.”  Basically, you’re OK only if you have a D next to your name.

The media and the Democrats told us Hillary was off limits in 1992 and 1996.  (She went on to make a mess of our economy in the U.S. Senate, and a mess of the world as Secretary of State.)    But now it’s OK to talk about Ann Romney.  We were told to lay off Amy Carter and Chelsea Clinton.  But the George W. Bush twins got battered in the media.   There is a war on women — women who have fled the leftist, feminist plantation.

2 thoughts on “Stepping up in defense of Ann Romney”