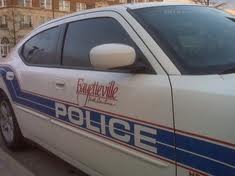 We CAN’T be doing anything wrong.  It must be whitey’s fault. 400 years of  oppression, you know.

The race pimps are currently upset with the Fayetteville Police Department’s use of consent searches of vehicles during traffic stops. They claim this practice is a useful tool in ‘racial profiling’ — “disproportionately” stopping black drivers.  Never mind that quite a few of those black drivers were stopped by black and Hispanic officers.  That’s — like the name of Al Gore’s godawful movie — An Inconvenient Truth.

Now, the city council has turned to “consultants” to “fix” the police department. Oh, goody.  The consultants are recommending sensitivity training and a citizens’ review board, among other goodies.

I know a number of retired and active cops. They tell me they typically don’t know — for sure — the race and / or gender of a driver until they’ve stopped the suspect car and approached the driver’s window.  Another inconvenient fact.

I got profiled once.  A trooper pulled me over on I-95.  I wasn’t speeding, so it really had me puzzled.  The trooper approached me and asked how I got the damage to my car’s right front quarter-panel.  (I had recently been involved in a minor collision.  A police report was on file and the insurance company had been alerted.) After verifying my story, the trooper apologized for the inconvenience.  He said a bulletin had been broadcast to all officers in the area to look for a fleeing robbery suspect driving a car that resembled mine — down to the location of the body damage.

The guy was doing his job.  No sweat.

Like that trooper, officers often have a limited amount of information — and a short time span — to make a decision on stopping a vehicle.  I’d rather the officer guess wrong and stop me, than to decide against stopping someone who really needs to be stopped.

What do the race pimps want?  Racial quotas on traffic stops? (We’ve already got a standard that works pretty well:  probable cause.)

I can just hear it now:  “Dispatch, this is Car 54. I see a car speeding recklessly down Raeford Road. It appears the driver is a young black male.  I’ve already met my week’s quota on black men. Check with the review board to see if I can get my quota adjusted upward, or dispatch another officer — preferably an African-American.”

This is the same kind of nonsense that has Catholic nuns and 80 year old men in wheelchairs being fondled at airport security checkpoints.  Your typical hijacker is a young Arab man. By all means, target them.

The race pimps demanded the current social welfare mess that has torn apart black families, mired a huge chunk of the black population in poverty, and led a lot of young black men to early deaths or a life in-and-out of jail.  Instead of admitting their mistakes and trying to fix things, race pimps attempt to distract their frustrated constituency by refocusing their anger on whitey and the police.  It’s despicable. It’s wrong, and it needs to stop.

Fayetteville is being rocked by violent crime.  You’ve got street gangs, and shootings at Cross Creek Mall.  (There’s a good reason the SBI, FBI, DEA, and ATF all have regional offices in the city. There’s a lot of business for them there.)  The city council and the race pimps need to get out of the way and JOIN the fight to clean up Fayetteville.