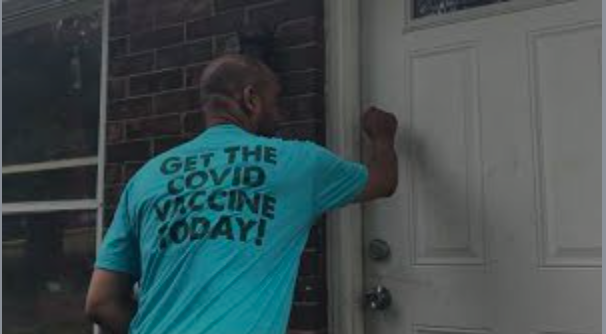 The up-close and personal tactics of the Cooper and Biden administrations are getting some unwelcome national attention:

Though North Carolina’s “door-to-door” vaccine outreach program has been called “not confrontational,” a health advocacy group said it veers into violating a “zone of privacy.”

The zone of privacy is civil liberty constitutionally protected in the Bill of Rights first recognized by the U.S. Supreme Court in Griswold v. Connecticut (1965) when it determined that the government can’t restrict the sale and use of contraceptives, invalidating an 1879 law that the court ruled was a violation of “marital privacy.”

The court’s ruling later became a precedent in the 1973 case of Roe V. Wade, which decided that the government can’t excessively restrict a woman’s right to have an abortion.

Leslie Manookian, president and founder of the Health Freedom Defense Fund Inc, (HFDF), a nonprofit headquartered in Sandpoint, Idaho, told The Epoch Times that the established zone of privacy is being challenged by the door-to-door campaign.

“We don’t walk up to people and ask them, are you on anti-depressants? Do you have erectile dysfunction? We don’t ask people personal things like this for a reason, because it’s unethical, and because of this zone of privacy,” Manookian said. “We understand that it’s not our business to meddle in other people’s businesses, and it’s not the government’s business, either.

Mecklenburg County Public Health Department (MCPHD) in Charlotte, North Carolina initiated a “doses-to-doors” vaccine campaign that is followed by a mobile clinic to administer shots to those swayed.

The health department’s program, which began last week, is a part of a larger campaign spoken about in a speech on July 6 when President Joe Biden said there needed to be a movement to visit each community, neighborhood, and “oftentimes door-to-door—literally knocking on doors—to help the remaining people” who aren’t vaccinated.

In a July 9 letter addressed to Mark Elam, chairman of the South Carolina Department of Health and Environmental Control (DHEC), McMaster said the decision to get vaccinated is a personal one.

“Enticing, coercing, intimidating, mandating, or pressuring anyone to take the vaccine is a bad policy which will deteriorate the public’s trust and confidence in the state’s vaccination efforts,” McMaster said. “The prospect of government vaccination teams showing up unannounced or unrequested at the door of ‘targeted’ homeowners or on their property will further deteriorate the public’s trust and could lead to potentially disastrous public safety consequences.”

In his July 6 speech, Biden didn’t specify who would be going door-to-door, though in a July 9 press briefing by Press Secretary Jen Psaki, she said campaigners wouldn’t be federal employees but “grassroots volunteers” such as “members of the clergy” who would be providing information on vaccines.

In response to a reporter requesting that Psaki address McMaster’s resistance to the door-to-door campaign, Psaki said, “Well, let me first say that the failure to provide accurate public health information, including the efficacy of vaccines and the accessibility of them to people across the country, including South Carolina, is literally killing people, so maybe they should consider that.”

Manookian alluded to this and several other media reports that suggest the unvaccinated are “killers,” and what William Schaffer, a professor in the Division of Infectious Diseases at Vanderbilt University Medical Center, called “variant factories,” implying that an unvaccinated person has the potential to mass-produce, or multiply the virus into mutation, creating “a more serious variant down the road.”

“They are painting the unvaccinated as disease-ridden carriers,” Manookian said.

Missouri Gov. Mike Parsons also spoke out against the campaign in a July 7 tweet: “I have directed our health department to let the federal government know that sending government employees or agents door-to-door to compel vaccination would NOT be an effective OR a welcome strategy in Missouri!”

DHEC Director Edward Simmer responded in a press release on the department’s web page stating that the DHEC will not enact unsolicited door-to-door visits, though Simmer stressed the importance of vaccinations.

U.S. Department of Health and Human Services (DHHS) Secretary Xavier Becerra told CNN that it’s the government’s business to know who and who hasn’t been vaccinated.

With funding from the American Rescue Plan, the DHHS has invested up to $10 billion to expand vaccine programs into rural areas.

A spokesperson for The North Carolina Department of Health and Human Services (NCDHHS) told The Epoch Times that the NCDHHS will, however, employ doing door-to-door knocking across the state “to ensure that people have the information that they need about vaccinations and can easily and conveniently get vaccinated,” and added that the purpose of this initiative is to increase access to historically marginalized populations “through outreach and education efforts.”

This effort is a part of the Healthier Together initiative, which the spokesperson said is intended to drive demand and increase access to vaccines in marginalized populations.

The initiative is a partnership between the NCDHHS and the NC Counts Coalition, which has released a request for proposals for which community organizations can apply in amounts up to $500,000 in grants to support groups “that will help North Carolina achieve its goal of delivering equitable access to vaccines.”

The NC Counts Coalition is a nonprofit established in 2017 to assist in achieving an accurate count for the 2020 Census by highlighting undercounted communities.

In Mecklenburg County, Action NC, a nonprofit that addresses social and economic inequality, partnered with the MCPHD to begin the outreach that, as of this week, includes the doses-to-doors program.

Robert Dawkins, political director for Action NC, told WBTV News in Charlotte that doses-to-doors is non-confrontational, and that no one is forcing anyone to take the shot, however, he added that it’s the job of the health department and Action NC to “dispel rumors” about the vaccines.

YouTube cites “medical misinformation” when it pulls videos off its platform for allegedly violating its terms and conditions of giving out “harmful information.”

Manookian said this type of censorship should not only raise concern, but it also speaks to the integrity of the narrative Big Tech says it protects.

“The fact that you are not allowed challenge the official narrative, that doctors and scientists who say what is being put by mainstream media is inaccurate, should make thinking person shiver with concern and seriously ask questions about what is going on, because if we can’t have an open debate, then somebody is trying to hide something,” Manookian said.