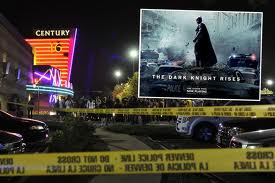 Of course, the gun control people are leading the charge.  Blaming guns for that tragedy is kind of like placing all of the blame for a traffic accident on ONE of the two cars involved.  The person driving the car – and the person holding the gun — are responsible in both situations.

From what I’ve seen of news reports, the shooter in Colorado had NO prior criminal record.  So, there would have been NO red flag raised by a background check at a gun store.

( Meanwhile, the dirtbag who shot the cop in Lumberton the other day was out on bail for a long list of violent offenses.  HE managed to get his hands on a gun.)

Tragedies like Columbine, the Gabby Giffords shooting, and this theater shooting all boil down to one common element: seriously mentally-ill culprits.

I am sure, as this story progresses, we will start seeing news coverage from people who knew the suspect saying: “Yeah, he was always acting kind of crazy.  Kind of scary.  I just kind of ran away when he came around. Stayed away from him. I never imagined THIS.”

(From what I understand, the Colorado suspect dressed like The Joker character from The Dark Knight and mimicked scenes from that movie.)

Therein lies the challenge.  In the 1980s, the ACLU trashed the government’s ability to institutionalize and treat mentally ill individuals.  Instead of being off the streets and under care, these people began living in boxes on street corners.  We got “homelessness.”  Seriously disturbed, scary people were thrown into the mix with the rest of us who are simply trying to make a living and get by in this world.

Law enforcement friends remind me that it is NOT illegal to be crazy.  There is not a whole lot that can be done until one of these disturbed individuals snaps and does something terrible.

Our society has evolved so much toward a ‘mind your own business’ mentality.  See someone behaving in a disturbed manner?  Walk away.  It’s not your problem.

(Remember the naked face-eating guy in Miami a few months back?  Surveillance tape showed several people walking RIGHT BY that crime as it was occurring.  The Columbine kids kept a bunch of really creepy, disturbing stuff in their rooms.  The parents said ‘Ho-Hum.’ )

When someone is over 18 or 21,  you can’t exactly MAKE them go see a psychiatrist.  Though, North Carolina law does allow for involuntary commitments.  If you determine that someone could be a danger to himself / herself or others, you can take them to a hospital emergency room (or call an emergency responder to do that for you).  The person in question can be checked out by a doctor and held for observation for 24 hours (in some cases longer), if the doctor deems it necessary.

The bottom line is this:  If there is someone in your life behaving in a seriously disturbed manner, don’t just shrug and turn  a blind eye.  Do your part as a friend, acquaintance , or loved one and do what you can to get them some help.  Don’t wait until the media comes to you after a tragedy, so you can say: “He was acting a little strange.  I always feared something like this could happen.”

Stepping up and getting involved can save that troubled person’s life — and quite possibly the lives of others.