We’ve all heard the laundry list of epithets that leftists like to spit at us:  Anti-woman, polluters,  racist, religious bigots, violent, blah, blah blah.

Just surveying current events, it would appear that the lefties need to take a good hard look in the mirror before hurling those epithets.

VIOLENCE.   Black Lives Matter. Antifa. (The guy who shot up the congressional baseball practice.) Charlotte.  The inauguration day riots.  If there’s rough stuff happening in the streets, folks on the extreme left are typically right in the middle of it.

You didn’t see the Young Republicans trying to burn DC down during Barry Obama’s two swearings-in, did you?

POLLUTION.  The dirtiest, filthiest places in this country, and around the world, tend to be locales OWNED by leftists.  (Been to Durham lately?)  They have even managed to trash Hawaii, of all places.

Compare the post-event landscape in Raleigh and DC after leftist and conservative outdoor gatherings.  Our side actually picks up our trash.

ANTI-WOMAN.  This one is especially amusing. The other side threw a fit about some locker room talk involving Donald Trump that surfaced on video during the election.  Meanwhile, they have Bill Clinton and his cigars and now Harvey Weinstein and his bathrobe.  They HAD ted Kennedy and Chris Dodd in the Senate.  (The GOP had Bob Packwood, but he was basically a Dem – given his voting record.  A good liberal.  Not much of a gentleman.) 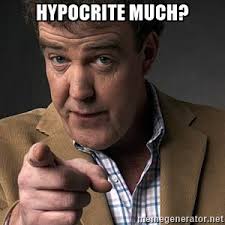 RELIGIOUS BIGOTS.  Another knee-slapper.  We get labeled bigots for expressing concerns about a group of people known to do things like scream ‘’Allah Akbar’’ and: (1) blow themselves up, (2) crash planes into buildings and cars into people.   Never mind that group of people is also notorious for being rather, um. ungentlemanly.

Ladies, visit one of the countries where those folks are the majority and try (1) driving a car, or (2) going out in public without a headscarf or veil, or (3) sitting in public at a table with men, or (4) even arguing with a man in public.  You ladies in the Womyn’s Studies department let me know how that goes.

Stand up for your religious beliefs — like not catering a gay wedding or endorsing gay marriage — and you will be slandered and mercilessly attacked by leftists and their lawyers.

You can get run out of business for daring to mention Josh Stein is a Jew.  But nary a word is said about attacks like this on Dan  Forest and his faith.

Hands down – Christians are regularly the most generous, giving people out there in times of trouble.  Christians would be the last people to quiz an earthquake or house-fire victim or crash victim about his sexual orientation or party affiliation before aiding them.  *But we’re STILL bigots.*

One thought on “Look in the mirror.”