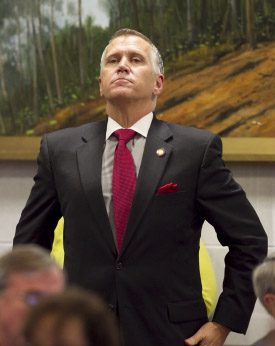 Yep.  This what we voted FOR, right? This film-flam scam artist is laughing at us while he fleeces us:

[…] Two days after a gunman killed 19 children and two teachers in Uvalde, Texas, in May, Tillis and Murphy found themselves huddled in Kyrsten Sinema’s pink-walled Capitol hideaway with the Arizona Democrat and Texas Republican John Cornyn. There they began to hammer out the agreement that would produce the first major gun legislation in nearly three decades.

In July, Tillis, Murphy, and Shaheen were among 16 senators who reached a compromise on updating an 1887 electoral law designed to avoid a repeat of January 6, 2021.

In an increasingly polarized Congress, Tillis’s willingness to work across the aisle has elevated his profile, even as it sets him apart from many in his party. During Joe Biden’s time as president, he’s also worked with Democrats on infrastructure, immigration, and the expansion of NATO. 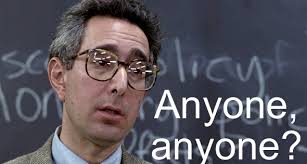 *Everybody remember him talking about this when he ran for election and reelection?  Anybody?  (Bueller?)*

[…] But Tillis’s independence could come at a price.

It’s left him out of step with many in a party that, fueled by a militant populism, has shifted steadily and sharply to the right. If he runs again in 2026, he risks not only a primary challenge but the loss of part of his base in a state in which he’s never won more than 49 percent of the vote in a Senate race.

The GOP platform is not a secret.  It’s amazing how you get blasted as “militant” for supporting it.  Guys like Tilli$$$ who pretend to support it, and then run to the left after getting elected, are praised as heroic.  In the real world,  that is fraud — or obtaining property by false pretenses.  In politics, it’s called being heroic, or “growing in the job.”

[…] The conservative Beaufort Observerpublished an article headlined: “RINO Senator Thom Tillis Working to Sell Us Out on Gun Control.” (The epithet stands for “Republican In Name Only.”)

Former N.C. Gov. Pat McCrory, who lost a Senate primary this year to Trump-backed candidate Ted Budd, told The Assembly, “In the end [Tillis] may have the exact forces working against him that I had.”

Aren’t you glad we fought so hard to make THIS turd governor?  *Seriously.*

If that doesn’t take the cake, check this out:

[…] “There aren’t that many Thom Tillises left,” said conservative commentator Bill Kristol. “Thom Tillis used to be a very typical Republican senator. … Now he’s one of the relatively few to step up and be willing to do something in a bipartisan way.”[…]

Bill Kristol is the capo di tutti of the NeverTrumpers.  He campaigned against Trump and his supporters.  His rewards were his magazine, The Weekly Standard, going belly-up and being banished to late-nights on unwatchable CNN.  Tillis and Kristol.  Those two jackasses deserve each other.

[…] Dean Hingson remembers the first time he met Tillis—in 2014, at a meeting of the Republican National Senatorial Committee in Washington. Tillis, then speaker of the N.C. House, walked in with a phone glued to his ear. He was giving instructions to the person on the other end, who turned out to be then-Gov. McCrory.

“It was pretty clear who was giving advice,” recalled Hingson, a veteran Capitol Hill aide.  “It confirmed my later impression of Tillis as a doer. … He had another life in the private sector and came out of the state legislature which, unlike Congress, has to get things done.”[…]

Well,  THAT confirms Thom is the “brains” behind ol’ Patty-cakes.

[…] Two years later, Tillis joined Wang as its manager of research and development. He soon caught the eye of Price Waterhouse, the giant accounting and consulting firm. Hired in 1990, he rose to partner in six years while also earning a bachelor’s degree from an online arm of the University of Maryland. […]

Remember when he tried to pass his alma mater off as U of M?  He got nailed by the media and had to confess he got his degree after 17 some years of community college and online work.  “Rose to partner”?  They called everybody that worked for them a “partner.”  Just like Wal-Mart calls all their store employees “associates” and Southern National Bank / BB&T gave out “vice-president” titles to everybody from tellers to janitors. Absolute dishonesty.  (But look who we’re talking about.)

[…] Though his party had a super-majority in 2013, Tillis sometimes worked across the aisle. He led a bipartisan effort to make North Carolina the first state to offer compensation to survivors of a state-sanctioned eugenics program, which forcibly sterilized more than 7,000 N.C. women.

“He was not as interested in deeply divisive social issues,” said former Democratic state Rep. Rick Glazier, one of his party’s most liberal lawmakers. “He was more interested in the economy of the state. … He stopped a lot of very harsh bills and tried to find a path where there was some consensus on bills that did pass.”

Glazier, now executive director of the nonprofit North Carolina Justice Center, found Tillis easy to work with. “The only thing he asked me was, ‘Don’t surprise me’,” he recalled. “[Tillis said,] ‘I know we disagree on things, but I know you try to make a bill better and more useful. And I’m appointing you to committees where you can do that’.”

Members say that despite the legislature’s turn to the right, Tillis was often a moderating influence. “Thom never legislated to the extremes. Never,” said former state Rep. Charles Jeter, a Mecklenburg County Republican. “Did we move gun legislation? Yes. Was it as ambitious or desirous as the NRA or [gun rights group] Grassroots North Carolina wanted? Absolutely not. And frankly, a large part of that was Thom.”

[…]Tillis is “probably as centrist as anybody in the Republican Party,” said David McLennan, a political scientist at Meredith College. “He demonstrated that even … when he was speaker of the House. He wasn’t a rigid ideologue.”

But that’s not what many Republicans wanted.   […]

He defrauded his voters.  Where would he be now if he honestly campaigned as a “cross-the-aisle” friend of Dems?

[…] “I think there are positions that the senator has taken that are not popular with every part of the Republican base,” state GOP Chairman Michael Whatley told The Assembly.

Last year, Lee County party officials scolded Tillis. “You need to stand more visibly in opposition to the current Administration and the leftists presently leading the Congress,” they wrote, “if you have any expectation of serving beyond 2026.”

Tillis has heard the complaints.

“I’m happy for any of these people … who would call me a RINO [to] sit down and talk about what I’ve done over the last 12 years, 15 years,” he told The Assembly. “Pick your favorite conservatives—your biggest fire-breathing conservative. Let’s list out what their accomplishments are. I’m willing to stand by mine.”[…]

This guy is throwing us all under the bus, and giving us the middle finger while he does it.  It’s going to be a real test of mettle if we keep allowing his Big Charlotte / DC special interest money, and behind-the-scenes splitting of the conservative vote, to slip him back into office AGAIN with less than 50 percent.

3 thoughts on “Liberal Praise for Tilli$$$”