With all of this talk of ‘draining the swamp,’  Appalachian State University is looking like a great place to get started.

Here is the Boone campus’s latest foray into the national spotlight:

“Bernie is asking for a political revolution and college students are some of the main demographic he is speaking to,” Elizabeth Prier, communications director for the Young Democrats of Watauga County, told students at Appalachian State University’s Plemmons Student Union.

That was a year ago.

[…]At four in the morning, the four feminists went to work. The Appalachian Antique Mall, its cozy windows still filled with shining lights and gifts, was defaced with hateful scrawls of “Black Lives Matter” and “Ruled by White Supremacy”. Earth Fare, an organic food supermarket, was denounced for “Neoliberalism”. The term is largely associated with the anti-free enterprise radical left. 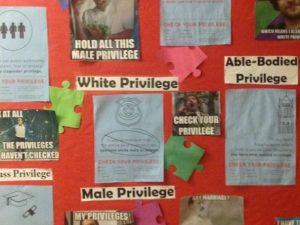 The Dan’l Boone Inn, a family restaurant in one of the oldest buildings in town serving Southern Fried Chicken and Black Cherry Preserves, was smeared. The vandals did their worst to a Boone police cruiser.

ASU facilities had also been vandalized making it all too easy to figure out who was responsible.  A tip to High Country Crime Stoppers located the culprits who were predictably ASU students.

The four, Elizabeth Prier, 22,, Julia Grainger, 22, Taryn Bledsoe, 22, and Hannah Seay, 21 were part of Appalachian State University’s social justice crowd. The meaning of what happened to them goes beyond the vandalism in downtown Boone. It was the endpoint of the indoctrination into extremism on campuses across the country that transforms students into vandals and violent protesters.

[…]Julia Grainger is the Director of Marketing for the Appalachian Social Justice Educators club. ASJE is the center of social justice radicalization at ASU. Its logo is a black power fist. Julia had made headlines in the past for attacking a fraternity’s efforts to combat sexual assault. She had denounced fraternities as, “hyper-masculine, rape culture perpetrating cesspools” and their members as, “sexist, racist, homophobic, ignorant trash.”

[…]While Appalachian may not be the first name that comes to mind when thinking of radical campuses, leftist radicalism had become deeply embedded in the former teacher’s college. Gender, Women’s and Sexuality Studies at ASU is headed by Kim Q. Hall. Hall was the co-author of “Whiteness” which encouraged “resistance” to whiteness. The ASU campus features a “Tunnel of Oppression”. 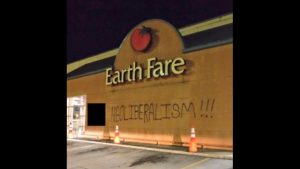 […]Instead of protecting students from social justice hate, ASU administrators instead chose to intimidate them. A Bias Incident Response Team (BIRT) was rolled out to deal with “unwelcome” speech.

But when actual criminal acts are committed by social justice activists, administrations ignore them. They have to because the ugly truth is that left-wing hate on campus does not come from without, but from within. The women who vandalized local businesses and the campus had been radicalized on campus. When ASU administrators refused to denounce hateful acts, such as the privilege hate boards, they opened the door for their racist messages being scrawled on a larger and more illegal scale.

When the Boone police department announced that the women had been identified, social media messages from other radical students cheered the perpetrators. The supporters had social media profiles touting everything from white privilege to the black panthers to white genocide.

I’m a big fan of Watauga County.  It’s a home away from home for me.  The area around Boone and Blowing Rock is one of the most serene, relaxing, culture-filled scenic venues in the state.

So, it troubles me to see what’s going on at App..   First of all, things have been rather soap opera-ish at the top of the food chain there.  The most-recent-past chancellor left under a cloud of mystery.  (Some details about that will be forthcoming on this site.)  The latest chancellor — one Shari Everts —  is a fire-breathing radical feminist whose tenure has been marked with a spike in on-campus violence and student deaths, an on-campus political campaign aimed at shaming white men, crony capitalist business dealings involving administration figures, and an appalling lack of ethics. 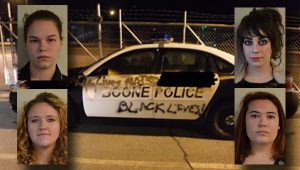 There have been reports of black mobs harassing students on campus who dare to show support for Donald Trump.  And the mob gets protective cover from the administration.    Here is some video of the leftist intimidation in action.

Chancellor Everts anted things up by hiring a “chief diversity officer.”   This Barack Obama wannabe has been quite open about his agitation agenda for the Boone campus.

Not long after this dude got hired bulletin boards began appearing around campus trumpeting the *threat to humanity* represented by white males.

The 2014-2015 academic year saw a record NINE student deaths at the Boone campus.    2016 saw at least one on-campus shooting and a drug overdose.  Yep, these are the peaceful serene North Carolina mountains we’re talking about. The radical left is turning beautiful Boone into Durham. 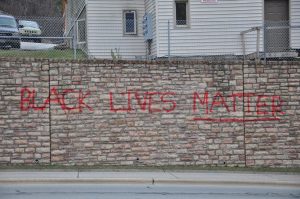 A recent past chairman of the university’s board, Brad Adcock, is now a close adviser to Governor Roy Cooper. So, expect NO HELP from the executive branch.  Josh Stein, Roy’s little buddy, now occupies the attorney general’s office.  So, expect no help from him.

So, what can be done?  Adopt some of the left’s tactics.  Boycott App.  Stop sending your kids and your hard-earned money there.  Alumni, STOP donating.  Legislators can be pressured to stop appointing big donor seat-warmers to App’s board, and start appointing people seriously interested in cleaning up that swamp.

We fund this hot mess with our tax dollars.  We deserve better. If our “leaders” won’t help, we need to take the initiative.

10 thoughts on “Drain the Swamp: The flaming HOT MESS at Appalachian State”