That loud little cartoon character running the NCGOP has outdone himself again: 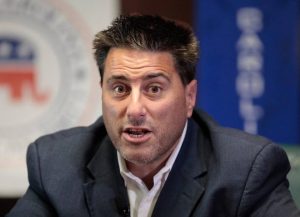 A North Carolina Republican leader was accused of “boasting about skirting campaign finance laws and laundering money” through the party’s treasurer, but he said his comments were taken out of context and were clearly a joke.

The N.C. Democratic Party sent an email to the media with an alleged audio recording of N.C. GOP Executive Director Dallas Woodhouse at the Red, White & BBQ event hosted by the Eastern Wake Republican Club in Knightdale.

“When we need to take illegal cash under the table and when we need – I see none of the politicians are laughing – when we need to take the big liberal Hollywood elites’ money, nobody can help us hide it better than David (Cozart),” Woodhouse said. “Thank you; it was so hidden that even I was unable to find it or spend it.”

Woodhouse confirmed to The News & Observer on Thursday that the recording was him speaking at the event, but he said he was “obviously speaking in jest.”

“There’s no story here,” Woodhouse said. “This was a roast of a retiring treasurer at a barbecue. Clearly you can see it’s in jest.”

Woodhouse said that, in the recording, his comment about the money being “so hidden that even I was unable to find it or spend it,” should have made it clear that he was joking.

[…]On Wednesday, the N.C. Republican Party accused Democratic Gov. Roy Cooper of violating campaign finance laws. At issue is a conference that Cooper attended in June, hosted by the North Carolina Advocates for Justice, a lobbying group for trial lawyers. In addition to panel discussions on eminent domain, employment law and other legal issues, the conference also featured a “Roy Cooper fundraiser” session on June 18, according to documents provided by the GOP.

The complaint against Cooper “is well-researched and documented,” Woodhouse said. “It’s a serious issue.”

Woodhouse said the Democratic Party was taking a shot at him and the implication that the Republican Party broke or skirted campaign finance laws has “no evidence and is ridiculous in its notion.”

“It is not newsworthy that I tell jokes,” he said. “I tell jokes every day.”

Yep.  Once again, our hero steps in it.  The NCGOP tried to score a PR win on Roy Cooper — and the story ends up being about something stupid that came out of Dallas’s mouth.

Dallas might want to be a little careful about hollering too much about campaign finance abuses.  Carolina Rising, anyone?  Glass houses?

(And, of course, we can’t forget this charming on-camera performance from 2014.)

5 thoughts on “Did you hear the one about money laundering?”