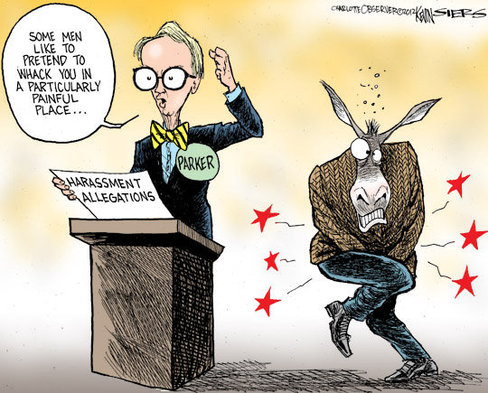 North Carolina Democrat Party Chairman David Parker has confirmed he will not seek reelection to another term next month.

Parker has been at the center of a sexual harassment controversy at state party HQ ever since allegations surfaced that a male  former party executive sexually harassed another male party employee, and hush money was reportedly paid out.  Parker stood by his men, even while just about every elected Democrat in the state was calling for his head.  Parker’s defiance became a lot harder to justify or sustain when details of the alleged incidents hit the media:

Jay Parmley resigned his post Sunday after news of the allegations became public, but he has denied wrongdoing.

“Let me be clear: I have never harassed any employee at any time at the NCDP or in any other job,” Parmley wrote in his resignation letter. He did not respond to a call from WRAL News Wednesday evening.

In a letter to Parmley dated Dec. 8, 2011, the junior staffer tells a very different story. He lays out specific behaviors he said constituted sexual harassment including: